If you’re a child of 80s, you know that October 21, 2015 has a very special meaning — it’s the day Marty McFly arrives from 1985. I don’t think anyone really expected our future to have the flying cars, hover boards, and double neckties portrayed in the movie, but it’s still cause for celebration, especially during a month where every adult can dress like a bojo. 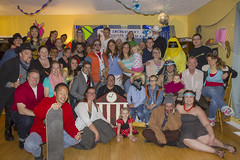 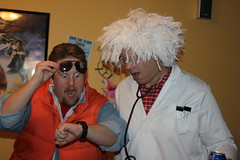 On Saturday, Hannah and Aaron got a taste of trick-or-treating by donning their Halloween costumes (Anna and Pooh) and going down to Gifford Farm for some candy and hay-sliding.
Then that evening, Vivian and I celebrated Jenny’s birthday Back to the Future style at Dean’s house in Bennington. All our friends came dressed as characters from the Back to the Future franchise, representing all possible settings and timelines throughout the movie — past, present, and future. We had multiple versions of Biff and Marty (though only one Doc Brown) and people even came as inanimate objects such as the clock tower and the lightning that hit it. It was especially fun reenacting moments from the movie. Vivian and I came as the Flux Capacitor and Buford “Mad Dog” Tannen, and it was particular fun to join the party completely in-character. We even had cans of “Pepsi Perfect” to go along with Vivian’s Flux Capacitor Cupcakes.

Jenny had a Back to the Future trivia quiz, and Vivian won a Cafe 80s tumbler. We also had a little dancing, which wasn’t easy in my knee-high boots. It was definitely a party for the ages. I only wish we could have stayed later, but time isn’t quite as wibbly-wobbly and timey-wimey in reality as it is on-screen. 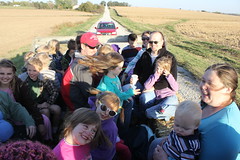 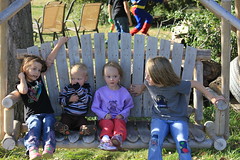 On Sunday, we dropped by the Hall’s place for their annual Hayrack Ride and Campfire Potluck with our church. This would be the last Hayrack Ride with the Rietjens, as Drew will be leaving Twin Valley Church to preach at Clear Lake Christian Church this November, so I snapped a few family photos for them as a going-away present. Our group spent a little while goofing around on a Salmon Ladder and riding giant wooden spools before climbing on the Hayracks to putter around the countryside. Every now and then I get to appreciate what it means to live in Nebraska, so close to rolling fields full of horses and one-room schoolhouses. We lit up the campfire and ate back at the Hall’s House as the sun quickly set.

Wednesday, of course, was the big day, and it could only be celebrated one way: with a large Pizza Hut pizza, half pepperoni, half green pepper. (And a bottle of Pepsi Perfect!)