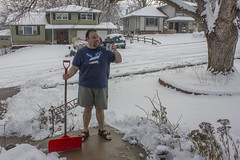 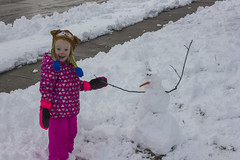 Merry Christmas, everybody! It turns out we had a white Christmas in Omaha after all. Of course, the weather folks were predicting just barely a dusting up until a few minutes before eleven inches fell on the metro area. It made for a slippery, treacherous drive to work on Thursday morning, but by noon o’clock the sun was out and turning everything to slush. The city had also transformed into a frosted winter wonderland, but that also meant I had to get our driveway shoveled up and scraped before it froze over.

Then Vivian and I brought Hannah outside to play a bit in the snow, making a snow angel, building a snowman, and also teaching her how to throw a snowball (but she decided that snow was better to eat than to throw). 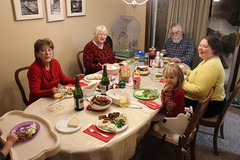 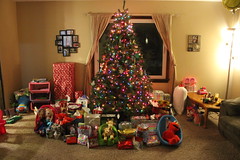 The inclement weather brought cancellations to our Christmas Eve service plans, which was a bit of a shame, but that did give us more time to have a proper Christmas Eve Dinner together with our friend Shirley. Jack made some roast beef with vegetables as Vivian helped out with the sides. Then afterward, Hannah and Aaron each got to open up a present or two, which included some new Christmas Jammies for both of them. Then after they were in bed (and the dishes were washed), the grown-ups got to open up our “stocking” presents together while having pie. Among many things, such as lens wipes and snowman ornaments, I got a tiny tub of Marmite that I immediately put on a cracker. (And then it mysteriously went missing. We haven’t seen it since.)

Before the grown-ups went to bed for a long winter’s nap, we got the presents all sorted out underneath the tree for Hannah and Aaron to see when they woke up the next morning. They both got quite a haul once again this year. I have to wonder where on earth we’re going to put all their new loot! 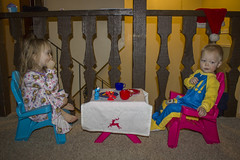 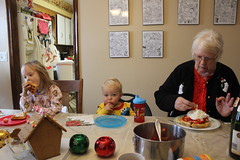 The next morning, Hannah got up around six-thirty to find that Santa had come overnight. We’d set up a tiny table with a pair of chairs for a set of “tea party” snacks for Hannah and Aaron to nibble once they got up and started opening presents. They both got a handful of books, games, and many different toys, including a plush Olaf and a set of Peppa Pig figures. Hannah also got a toy penguin that danced to Papa Americano, which she played repeatedly until Pop-Pop told her to put it away in the basement where he didn’t have to hear it anymore. I mixed up some batter and made Christmas Waffles for everyone, which we ate with whipped cream and strawberries courtesy of Donna. 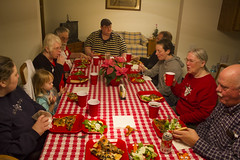 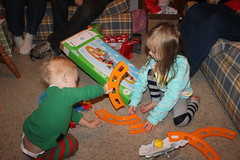 That afternoon, Donna and Vivian put the finishing touches on their cakes, which we brought to my mom and dad’s house on Christmas night. Dad put up his family of plastic lawn flamingos for the occasion, and then Jonathan, Nathan, and Ranae all joined us for a full and fairly complete family meal together. My parents cooked up a trio of Papa Murphy’s pizzas for dinner, and then we opened a slew of new presents in the living room afterward. Hannah got a Play-Dough set, Aaron got a toy train, and my mom got practical gifts such as MREs and a First Aid Kit (yay, dad). We had some cake afterward to celebrate Jesus’ Birthday, and then we finished off the evening looking at a few goofy slides Uncle Jonny had picked out for our amusement before going home.

It was a lovely Christmas overall, and we finished off the holiday by finally watching Star Wars: The Force Awakens in the theater on Saturday morning. Mom watched the kids, and then all five of us in the Johnson Clan went out to lunch together at Village Inn to reminisce before calling it quits.

I’m so happy to have so many lovely people to share the holiday with. Merry Christmas, everyone!