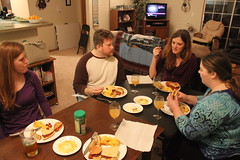 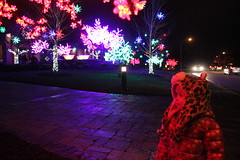 Christmas is nearly upon us, and that means getting together with our friends at least once for some kind of a Christmas Party. Vivian and I decided not to host a party ourselves this year, but our mutual friends Jenny and Kody took it upon themselves to have a fairly low-key event at their new place. We joined them and a few other couples for sloppy joes, corn casserole, and some southwestern egg rolls that we brought along in a completely improvised yet perfectly complementary dinner together.

Then the next day, we took Hannah and Aaron out to look at Christmas Lights. We dropped by the Linden Estates neighborhood once again to see some of their large light displays, but Hannah seemed a little less interested in seeing them close and personal again this year. Next time we might stick to some of the nice little displays we have right here in Bellevue. 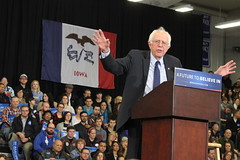 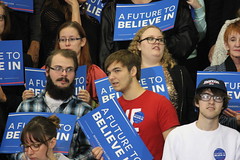 Then on Tuesday, I stepped a bit out of my comfort zone and went to a rally for “democratic socialist” Bernie Sanders. I’ve tried to meet up with as many presidential candidates as possible before the Iowa primary nearly a month away, and that includes any serious candidate willing to get this close to the Omaha metro. It was an interesting contrast to the ten Republican candidates’ events I’ve attended so far this year. At the Republican events, the attendees were fairly subdued, many of them coming just to hear one candidate or another without having really committed to anyone. There was a nearly religious zeal at Bernie’s event, with the crowd being led in chants and even responding to his speech like a “Greek chorus.” The Republican events were also more like town halls, with open questions from the audience, while this event was clearly more of a pep rally.

I was already familiar with most of Sanders’ political positions, but one thing that surprised me was his opposition to the Trans-Pacific Partnership, something pushed by Obama and opposed by many conservatives. Yet he didn’t mention Obama’s connection to the deal. He also railed against politicians taking money from big banks, but he had nothing to say about Hillary Clinton doing just that — even though he’s running against her. The Republican candidates I’ve seen have had no problem criticizing others in their own party. Not Bernie. In any case, we’ll see how this event compares to the rally for Donald Trump I plan of attending next Tuesday.