2016 is nearly upon us, and what better way to kick off the start of a Presidential Election year than by squeezing into the Mid-America Center to get a glimpse of the Republican front-runner? (Other than having fondue with family, of course.) 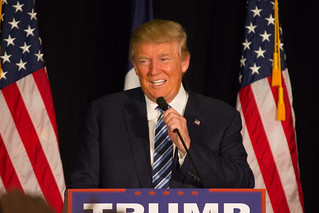 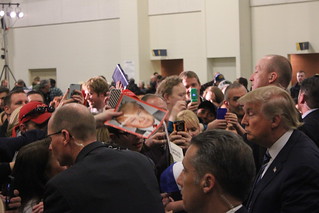 That’s right, I and my folks — along with several thousand other people — braved cold weather and a pat-down from the Secret Service (who did NOT like me taking their picture) to hear Donald Trump bloviate for an hour and twenty minutes completely unscripted. It was a unique event in that it had almost no seating for anyone, which meant in addition to fallen arches, everyone tended to squeeze together to get closer to the stage. It was a remarkably different crowd from the one that came to see Bernie Sanders — there were far more blue-collar types and families present than millennial hipsters. There were also people selling “swag” and even Donald Trump cos-player — a first for any political event I’ve attended.

If you’d like to see Trump’s speech in its entirety, it’s available on YouTube, but he spent most of his time talking about himself leading in the polls and touching on random subjects, including ending free-trade, a position he ironically shares with Bernie Sanders. I was fortunate enough to know just where to be once the speech was over to get up a close-up of Donald as he greeted attendees. So many others were pressing in to get autographs and pictures that it got just a little personal, but everyone was well behaved — the Secret Service made sure of that.

On to the New Year!