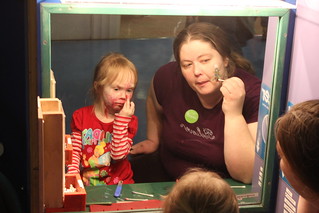 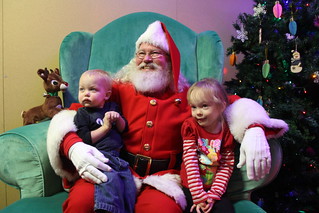 It’s Christmas Eve eve at last! Every year, December 23 also marks the anniversary of my first date with Vivian, so this year, I decided to take the entire day off to celebrate. A good chunk of that was spent at the Omaha Children’s Museum, where they had a special visit by Elsa and Santa Claus in a flurry of cute photo-worthy moments, filled with soapy suds of “snow.” Aaron had a good time playing with the water table and then in the ball area trying to catch the near-constant dropping of balls from the ceiling. Mommy and Hannah put on makeup in the meantime, and then we went upstairs, where they had a super hero exhibit. That kept Hannah busy climbing to the top of a tower and playing with a few of the Super Hero toys available for little ones. Of course, we also had to take a trip on the carousel and the train in-between going up and down the slides. Nothing like a little exercise before nap time. 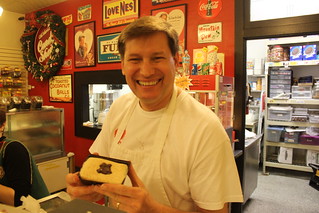 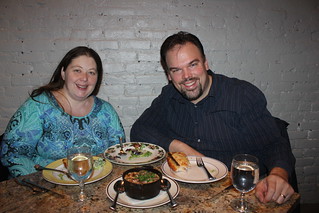 That evening, I finally took Vivian out to see the last of the Hunger Games films, Mockingjay Part 2. I’d been waiting for the end of this series ever since I finished the books a couple years ago, and it really didn’t disappoint — or diverge very much from the book itself, of course.

After the movie, we took a trip downtown, per tradition, to get some fudge from the Old Market Candy Shop. Mike was on hand to personally package up a special order of egg nog fudge for us, which we added to our bag of truffles, white chocolate almond bark, and assorted fudges (pumpkin, dark chocolate, and peanut butter).

Then, we walked next-door to have dinner at Le Bouillon, the sister restaurant to the Boiler Room now located in the same spot as the French Café, where we had our first date nine years ago. The décor was very much the same as the French Café, though the menu was quite a bit different. Our waiter described it as a “farm to table” style of food with various categories meant to be selected in a multi-course meal. In the end, we both picked a few dishes that sounded good and shared them all — rock shrimp to start, followed by Calamari Provençale, Fougasse, and finally the Cassoulet. It was all very good, and I think we might be back again next year.

We finished off the evening with a brief walk through the Gene Leahy Mall to see the beautiful Christmas lights. It made me think about all the other first date anniversaries we’d celebrated so far, which included multiple trips to the same locations, sometimes under new ownership.

Thanks for the wonderful memories so far, Vivian. On to Christmas!