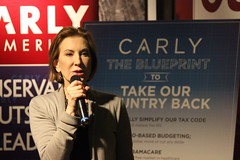 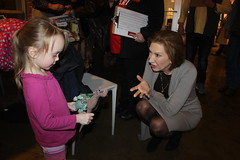 The Iowa Caucus will be all over in a week, so the candidates are making one last buzz though the state. On Monday, Carly Fiorina dropped into the Dixie Quicks on Broadway after getting snowed out once last week. I took Hannah to meet the one Republican woman running for president. I’d shown Hannah a video of Fiorina on CNN Saturday, and she told me “I want to run for President when I grow up.” Mrs. Fiorina had a nice, brief chat with Hannah (and her dinosaurs) before taking the stage.

Around 50 people braved the snowy roads to come out to participate in the town hall, including a few familiar faces in the crowd. Grandpa Johnson also came along for the visit and seemed very impressed with the former HP CEO, enough so that he took a yard sign home. 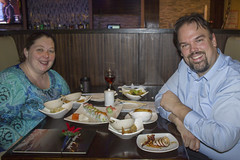 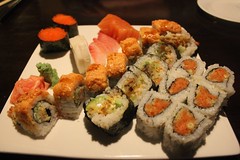 The next day, Vivian and I celebrated nine years of “officially” dating by having our traditional sushi binge down at Tokyo Sushi. We both got our fill of sashimi, assorted rolls, grilled squid, and green tea ice cream. Then we took a brief walk around the Old Market. We dropped by Ted & Wally’s to look at their exhibition of 6900 or so paper cranes, and then we ducked into Hollywood Candy down the street. The place had grown since we’d last visited, with a tiny movie theater and a maze of hallways and corridors containing random memorabilia, vinyl records, and other oddities (in addition to candy).

It was a fun, albeit brief mid-week date night to celebrate nine years of actually dating. Even though we’re rapidly approaching middle age, that doesn’t mean we have to act like it.