If it seems like I’m posting a lot about politics lately, that’s because the Iowa Caucuses are a few weeks away, and the whole state Iowa is overrun with politicians. I’ve met everyone in the race but Jeb so far. 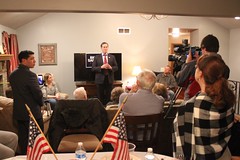 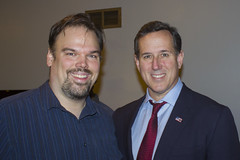 On Friday night, I got to meet Rick Santorum at a house party in the hills of Council Bluffs. Struggling at one-percent in the polls, the former Senator is running a modest campaign consisting of town halls at Pizza Ranch restaurants and small gatherings at “house parties” like this one. A couple dozen people showed up, and it was very easy to ask the Senator a question or get a selfie with him before or after his talk (which you can view in its entirety here, for now).

Policy-wise, Santorum talked almost entirely about foreign policy, the Iranian nuclear deal, fighting ISIS, etc. It surprised me, since he’s known for being a socially conservative Catholic, but his knowledge of foreign affairs impressed me. He’s more “hawkish” like George W. Bush, however, and has no problem with collecting mass metadata without a warrant, which many in the party believe now is a clear violation of the fourth amendment.

Once the party was over, Santorum and his staff retreated to one of the bedrooms for a prayer meeting before the end of the day. Before he did, however, I suggested to him, he visit Brickway or Upstream across the river, as I knew he was a man who enjoyed a good beer. 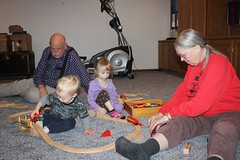 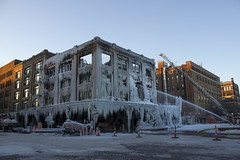 On Saturday, we had a lovely day with our kids visiting grandma and grandpa Johnson. We got to watch MST3K episode 609 “The Skydivers” and then had some tomato bisque and grilled cheese sandwiches for lunch. Afterward, we took Hannah and Aaron downstairs for an hour or two so they could play with the old Brio train set that I had as a kid. It’s amazing how well our kids can entertain themselves with such simple, wooden toys.

That evening, Omaha had a bit of tragedy as an explosion and subsequent fire at M’s Pub in the Old Market destroyed the entire building. Firefighters battled the blaze in near zero temperatures, causing the entire corner to be covered in sheets of ice and jagged icicles by morning. When I visited the following day to see the damage up close and personal, it was astounding. The smell of smoke and natural gas still hung heavy in the air as a lone fire hose continued to spray into the building. Some reporters were there covering the story, and several others lingered about taking photos, but the tragedy left everything dead quiet fort he most part. Fortunately, a waitress discovered the gas leak in time to evacuate the building before anyone was hurt. 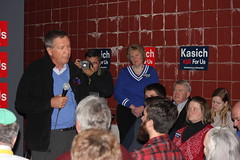 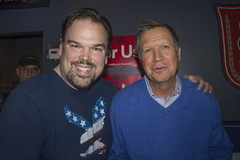 On Sunday evening, I dropped by Barley’s in Council Bluffs to meet Governor John Kasich. I’d been following his career since his first run for president back in 2000 (when my parents got to meet him), and I’d even watched him fill in for Bill O’Reilly, so I’m glad I got the chance to say hello. Like Rick Santorum, he’s also hovering around 1% in the polls in Iowa, but he does well enough nationally to make it to every prime-time debate. He’s an old-school “moderate” republican from the days when Phil Gramm was a democrat and Bill Clinton reformed welfare. He touted his record rather than new ideas, eschewing Ted Cruz’s 10% flat tax for a vaguely “simplified” tax code with three brackets. He also brought a 12-year-old girl from the crowd up on stage as an example of who would be paying the nation’s $18 trillion debt in a few years. It was a fairly modest crowd, with more than enough time afterward for me to get my obligatory photo with the Governor before heading home.

I apologize for the constant political posts, but in a few weeks it’ll all be over. In the meantime, however, I’m actually going to be seeing two Presidents of the United States within a week — Obama on Wednesday and Clinton on Saturday. Let’s just see how close I can get to a selfie with either of them.