It’s not every day you get to see a President of the United States, but somehow I’m going to see two in less than a week. Such is the draw of the Iowa Caucuses, I suppose. 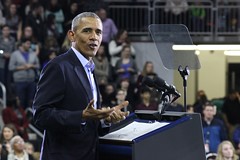 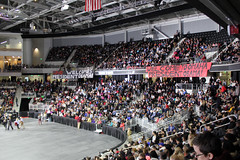 On Wednesday, Barack Obama paid a rare visit to Omaha fresh off his final State of the Union address. I hadn’t planned on attending, but when I learned he would be speaking at the Baxter Arena across the street from where I work, I decided to look into getting a free ticket to attend. It was surprisingly easy — I just showed up at the nearby Kroc Center and picked one up. On the day of the event, I had to wait about an hour in line with hundreds of other people (and a few protesters) to get through security as the UNO jazz band kept us company. The arena was nearly full when I finally got inside, and I didn’t think I’d get to sit anywhere close to the stage, but much to my surprise I was ushered into the second row right behind it. That means you can probably see me playing with my camera in some of the televised wide shots. It was the perfect spot for getting snapshots of Obama himself (and other dignitaries) when he finally showed up, fashionably late, per the norm.

As for the speech, I was largely unimpressed. Obama spoke about working with other countries to combat climate change and terrorism, but he won’t even work with congress on basic legislation, eschewing the People’s House for legislating by executive order. He’d met with the family of slain Officer Kerrie Orozco earlier in the day, so I thought he’d talk about gun control, but he didn’t even mention his visit. Instead, he talked about meeting a Papillion schoolteacher who wrote to him worried that climate change would bring a permanent end to Nebraska winters (and her son’s sledding). Obama also seemed to avoid all the heavy, important topics in favor a lighthearted speech on how things aren’t all that bad.

I’ve never been a fan of Obama, and I never voted for him, but I have a certain respect for the office, and I was glad to be able to see him in person. The full text of the speech is here (if you’re having trouble sleeping tonight). More of my photos here.