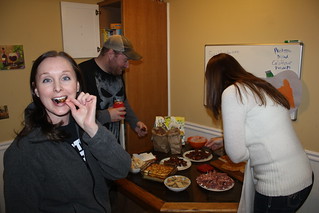 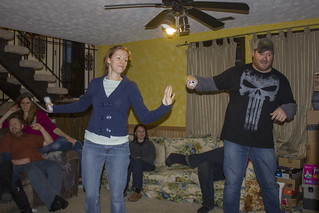 The long, cold weeks of January always seem to need something to brighten them up (after all the holiday bliss of December), so Vivian and I have been having alternating post-Christmas parties involving food for our friends. This year, it was time for the hors d’oeuvres party. We invited our usual cluster of hilarious friends to bring their best bite-sized nibblets, including Korean Tacos, bacon-wrapped jalapeños, peanut butter and jelly bites, and other Fantabulous goodies. Amanda won this year’s pig in a blanket for her Cheddar Bacon Pecan Pizza, a close second to Frank’s grilled pepper sirloin on a baguette.

We finished off the evening with some Fact or Crap and Just Dance down in the basement. 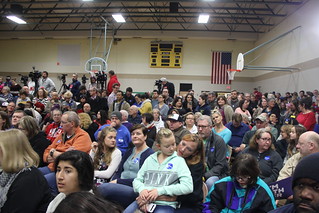 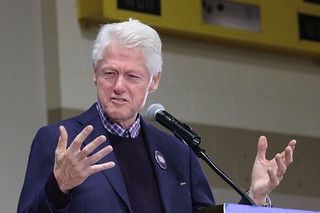 Then on Saturday, I got to see my second President of the United States in less than a week — William Jefferson Clinton. Yes, he’s gotten a bit older since the days of Monica, but Willie’s just as slick as ever. I actually enjoyed his speech much better than that other President who came to town, and his call for bipartisanship even seemed genuine. The usual cast of characters was there, of course, including Fake Security Guy waiting to get a picture autographed.

I must say, as a solid conservative who’s now seen Bernie Sanders, Hillary Clinton, Barack Obama, and now Bill Clinton in person, there’s something to be said for crossing the red/blue divide. I’ve found democrats seem to want many of the same things republicans do, but each side sees the world in a completely different way. There’s much we can learn from one another if we let our guard down and listen.

I’m still planning on voting for Marco Rubio, though.