If you’re sick of all my election-related posts, this will be the last one for a while. It’s Caucus time in Iowa, and that means all the candidates are making one last sweep through the Hawkeye state. I was able to see three different candidates over the weekend, and I even managed to drag Vivian and my dad along for part of the ride. 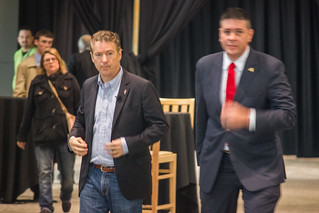 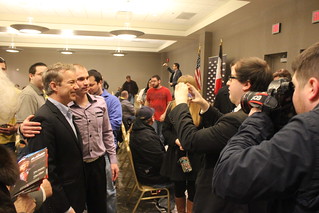 Saturday started off bright and early with Rand Paul at nine o’clock. The usual gang of media types, photographers, and random libertarians were on hand to hear the Kentucky Senator give one last appeal for votes (with Rep. Tom Massie). He didn’t stick around long afterward, greeting only a few people for handshakes and pictures before speaking to the media and heading on to his next event. He even outright refused to give autographs to the few people I saw asking for them.

There was a good turnout, but I was secretly hoping for a surprise appearance by Ron Paul, who didn’t show up until Sunday night in Iowa City. (I did, however, bump into Rand Paul’s sister. I told her to say hi to her dad for me.) 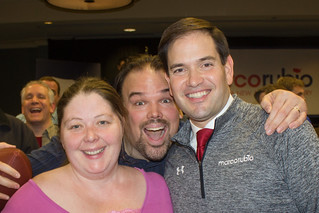 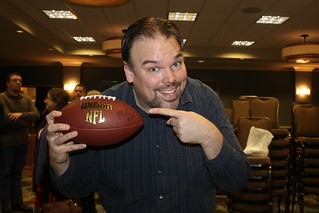 Then at noon, Marco Rubio paid one last visit to Council Bluffs, this time for a town hall “in the round.” Rubio took a handful of unscreened questions and then stayed around to meet and greet every single person, just like before. I was able to coax Vivian into coming to personally meet the man she planned on voting for, and I even got a picture of the three of us. I also brought along a football for Rubio to sign, in honor of his football-related mishaps on YouTube.

A five-year old Rubio fan named McCoy stole the show, however, dressed in a white shirt and cowboy hat and snapping several photos with his own little camera. His mom said he watched the debates with her and became a Rubio fan all on his own. She even gave him a hashtag #mccoy4rubio so I could share the photos with her later. (Though I doubt Reuters will be doing that.) 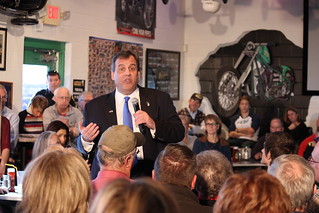 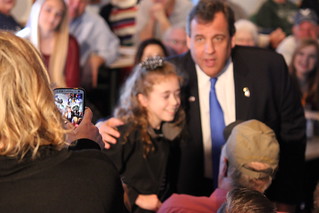 Then on Sunday, Vivian and I made a trek down to the Quaker Steak and Lube to see Chris Christie — the one other candidate Vivian wanted to see in person. The small meeting area of the restaurant was packed, and Christie took an hour’s worth of questions from a handful of people (but not me, unfortunately). He also promised to be back in Nebraska come May. Hopefully he’ll still be on the ballot by then. He stuck around only for a few minutes of handshaking and pictures afterward before heading on to his next event. I didn’t get the chance to introduce him to Vivian, but he did wave to the both of us in the parking lot. 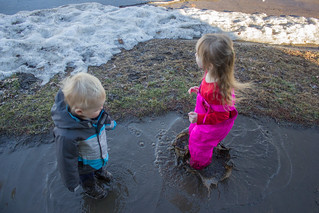 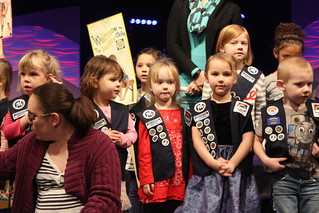 It was 50 gorgeous degrees outside, so I took the kids for some quality playtime outside before our Snowstorm Kayla hits on Tuesday. That meant walking around and splashing in some muddy puddles together, of course.

Then that evening, Hannah got to participate in a kind of open house presentation with all her little friends from Rainbows at Bellevue Christian Center. The teachers told everyone about the badges they had been earning, and the kids got to sing a song for all the grown-ups. I was there to get pictures as any proud papa, and it was hard to believe my little baby girl is growing up so fast.