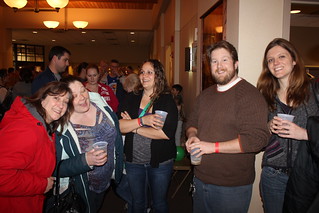 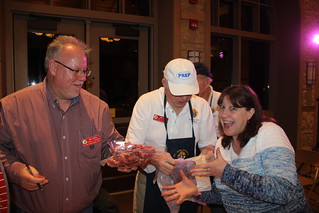 Because once is never enough, on Friday last week we dropped by St. John Vianney a second time for a fish fry with our friends. This time around, we braved the line with Lisa, Jenny, Kody, and Jon, as well as Phil and Jen when they finally arrived a few hours later. A bunch of Vivian’s friends from Friendship Program also came along, including Cliff and Amber and their baby boy. We all had our fill of fried fish and carb-laden sides as Guitar Guy played our standard set of songs. Lisa also happened to win another package of raffle meat, repeating her win from our very first first fry back in 2009 (no meat dress this time around, though). After dinner, we enjoyed playing with some eye-gouging paper airplanes before calling it a night. 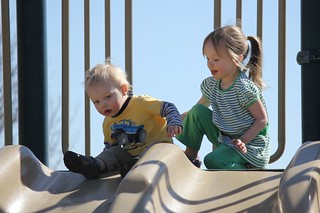 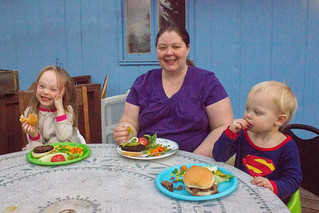 Spring definitely seems to have returned to Nebraska, at least for the time being, so on Saturday we took the kids down for some quality time at the Sand Park. Aaron braved the slides like a champ, repeatedly flopping his way down the curvy, bumpy slides without a problem. Hannah also made a friend with a set of construction toys, and even Grandma and Grandpa came by to visit a bit before we went home.

The next day, we had our first grill-out of the year, having burgers out on the patio as a way of kicking winter to the curb, at least for now. (We could still certainly have another blizzard or two before June. You never know.)