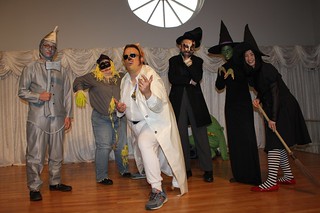 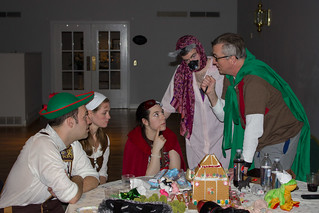 On Saturday night, Vivian and I transcended the Plane of Everyday Reality to attend a masquerade ball with around seventy other literary characters, all part of another one of Kaleb Michaud’s legendary murder mystery parties. The event was held at the Starlight Chateau, the former Poor Clares Monastery at 29th and Hamilton in North Omaha, which gave the event its own unique sense of history and spookiness (complete with a crypt downstairs). Vivian and I were a part of the “OZ” table as Scarecrow and Cowardly Lion, AKA “King” of the Forest, respectively. Other tables represented fairy tales by Hans Christian Andersen and the Brothers Grimm, A Midsummer Night’s Dream, Olympian Mythology, Alice in Wonderland, stories from the Steampunk Era, Sherlock Holmes, Robin Hood and Camelot, and a few others.

There was food and dancing throughout the night (with Vivian losing much of her straw), but much of the evening was spent trying to determine all the other guests’ identifies. There were also some dramatic moments when characters not in the public domain, such as Katniss Everdeen and Bella Swan, dropped by in disguise and were ushered out to be “burned.” At the end of the night our teams were graded on how well we did, and I think our table may have won, but I’m still not sure even several days later. In any case, it was a very fun night, and I hope Kaleb has a few more of these down the road even as he enters the new adventure of fatherhood with his wife Tzeyu Lin. 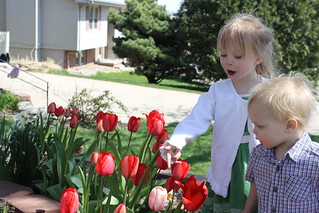 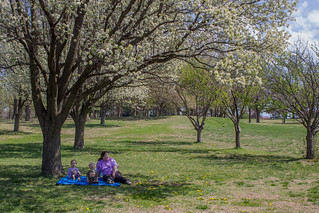 Of course, we’ve been busy parking it up with the kids as usual, enjoying lovely spring weather at Stinson Park and having a nice little picnic lunch at Memorial Park, taking in all the fragrant blossoms around the city (at least until the fires down in Kansas started stinking it up on Thursday).