It feels like we’re enjoying the last bit of beautifully cool spring weather before moving into the horrible hot and humid days of summer here in Omaha. That means more running around in the park and the fountains on days so lovely that the Pacific Life people decided to eat outdoors for no particular reason. 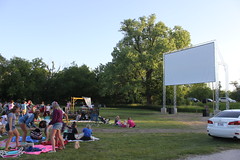 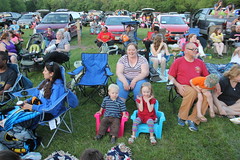 Then on Thursday, we went down to the newly-opened Sokol Park for a drive-in movie. The park has allegedly been around since the 1930s but only recently turned into something useful, with drive-in movies planned all throughout the summer, as well as concerts. They still had a fully functional park area that our kids made us of before settling in for the movie. Admission was only $6 for the lot of us, so we had money to spare for the snack bar, which included nachos with pulled pork and Hannah’s first Cheetos Experience.

The movie for the evening was Finding Nemo, which the kids naturally hadn’t seen before. Hannah found the sharks a bit scary, but both kids sat throughout the movie and enjoyed it (Aaron in particular cracked up at Dory’s whale-speak). 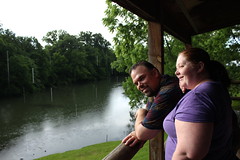 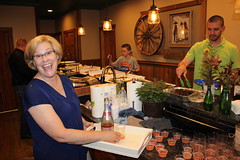 Then our friends Tamra and Ryan finally tied the knot that weekend. I was one of two official photographer friends covering the event, so Vivian and I went up to Fort Calhoun for the rehearsal with the family as a thunderstorm passed overhead. Then, we had dinner down at the Giving Lake (where the reception would be held) and received our wedding party gifts — homemade Hammerschlagen kits. (The only thing missing was the stump.) 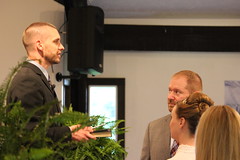 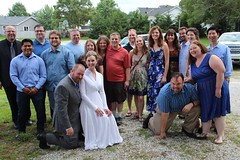 On Saturday, I got to break in my new Fitbit by staying on meet pretty much the entire day getting pictures and video of the wedding and reception. The ceremony was held at Abiding Faith Baptist Church in Fort Calhoun, and Tamra and Ryan definitely had fun with it — literally dancing down the aisle and then dismissing all the guests with silly string. They also had guests autograph patches of fabric to be made later into a quilt — a very unique touch. 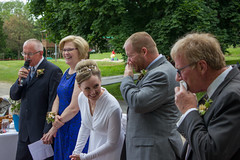 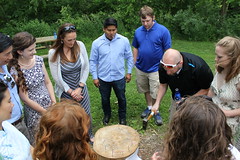 Libby, the other “official” photographer, stuck around for more posed photographs as I went on to the Giving Lake to get snapshots of the guests before dinner was served. It was an equally unique reception, with a money bouquet raffled off in lieu of a dollar dance, a platter of cookies instead of a cake, and a garter toss that involved a potato gun. The weather couldn’t have been more gorgeous, making it perfect for dancing outdoors (to everything from What does the Fox Say to Thriller), walking by the lake, and going joyriding in the 4×4. The venue itself was built with a strange Old West theme by the previous owner, which included a mock prison cell inside, among other things. Guests played Giant Jenga and Hammerschlagen (of course) in the adjacent play area, and everyone made use of Celebrity Faces on Sticks for selfies and other photo ops throughout the evening.

I stayed until it was too dark to take more pictures, well after my Fitbit happily buzzed with my step goal for the day achieved. Congratulations, Tamra and Ryan! I hope you both enjoy the pictures and video just as soon as I get done grinding them out.