Happy Father’s Day to all you wonderful dads out there! I had a lovely Father’s Day weekend with dads from both sides of the family. More on that in a moment. 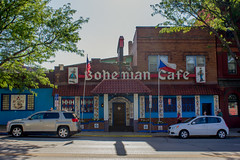 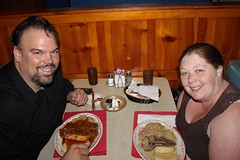 First, on Wednesday last week, Vivian and I paid a visit to the soon-to-be-closing Bohemian Cafe. The Omaha landmark in historic Little Bohemia is the latest casualty in our continuing loss of historic Omaha restaurants. It was the first restaurant Vivian visited in Nebraska, and the place I got to bump into Warren Buffett on my 32nd birthday a few years ago, so it had some sentimental value to the both of us. I ordered the roast beef with burgundy gravy, which came with mushrooms on top, and Vivian had the Svickova, Czech-style sauerbraten, which was a buttery kind of sliced pork thing. Both came with liver dumpling soup and dumplings on the side, which are a must if you ever visit the Cafe before it closes. Just be sure to arrive nice and early. The place had plenty of seating room at four o’clock, but a line nearly out the door an hour later. 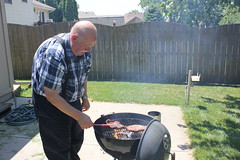 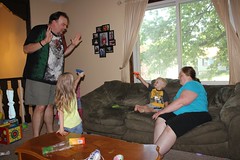 On Saturday, we celebrated Father’s Day with my dad in exactly the way he wanted — eating steak and watching Mystery Science Theater 3000. He fired up the grill and cooked a couple of rib-eyes for the lot of us, and afterward watched Revenge of the Creature, which was absolutely horrible. Uncle Nathan came up from Lincoln to join Uncle Jonny, dad and me for the day.

Afterward we returned to my house to give Aaron some belated birthday presents. Uncle Nathan gave him some squirt guns, which he immediately enjoyed using inside the house. Mom and dad also gave him a bubble lawnmower, which Hannah somehow immediately took possession of for the rest of the day. 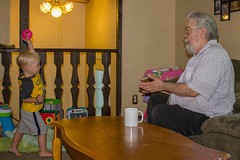 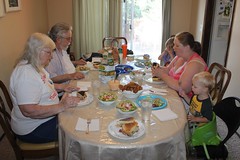 On Father’s Day, Vivian got me a delicious Abelardo’s breakfast burrito as we both went to church for the morning. Hannah got some play time with Chloe, and then we went home to chill for the rest of the afternoon. By chill, of course, I meant get stuff done. I actually enjoyed taking care of a few things this weekend, including installing a new sprinkler head, mowing our lawn and my parents, and then trimming back some trees on Father’s Day. Jack and Donna came by to play ball with the kids (in the house) while the moms made some tasty Cubano sandwiches and California salads for dinner. We had some presents afterward, which included sodas with disgusting names and a sleeveless black t-shirt, which Hannah confiscated to become a superhero.

Hannah and I got to enjoy my Father’s Day Cinnamon Buns (from church) the next morning for breakfast, and then I saw them again at lunchtime for quality time playing with pom poms at the park. In other news, Aaron got a tricycle. He’s growing up so fast.

It’s also officially summer now, and it’s also hot outside. I have a few words to say about that below.

An important message for the Summer of 2016