Omaha’s buzzing right now with such events as the College World Series and the Olympic Swim Trials, but we were much more interested in one of my favorite traditions over the weekend: Shakespeare on the Green. 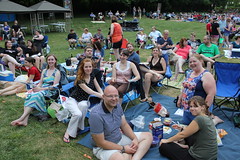 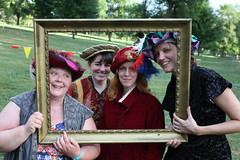 For 30 years, Nebraska Shakespeare has been performing the works of the bard out at Elmwood Park, and this year their comedy of choice is Taming of the Shrew. As usual, we gathered with a bunch of our friends to have wine and vittles on the green in-between trying on Elizabethan-era clothes for the full Shakespearience. The wandering minstrels were back of course, and a few cast members had some Q&A before the show started. We also discovered a picture I took a few years ago somehow found its way onto one of the official Nebraska Shakespeare banners, making our group more a part of this event than ever.

The crowd was notably smaller than usual, either from competing events or fear of a thunderstorm, which was originally predicted around showtime. It was hot and muggy without even the slightest breeze, but fortunately we didn’t get more rain than just a sprinkle or two. 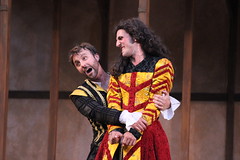 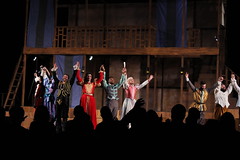 The play kicked off around seven, introduced briefly by emcee Tom Becka (continuing his reign of terror by stalking me) and a band of minstrels who performed in the audience before moving on stage. The show itself was unique in that all the parts were played by men in true Shakespearean fashion. Seeing both men playing women and men playing men but acting effeminate wearing strangely frilly outfits was strange to say the least, but the performance was good as always, and even easy to follow for those of us in the present century. I was fortunately enough to snag a spot right behind the VIP section earlier in the day, giving me and my friends a front-row seat.

In other news, Hannah gave Aaron some schooling by setting up her own mock preschool when our backs were turned, being as adorable as ever.