Vivian and I just finished celebrating eight years of marriage with a quick, midweek trip to the countryside to get some peace and quiet away from the city for a day or so. This year was a bit special in that I didn’t tell Vivian anything about what I had planned and let the whole thing be a surprise. 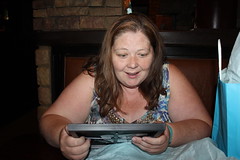 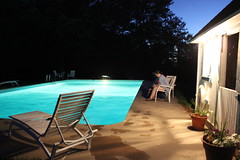 We kicked things off on Tuesday with dinner at Firebirds Wood Fired Grill in West Omaha, having steak and lobster (and cheesecake) in honor of our honeymoon in Bar Harbor, Maine. I presented Vivian with my annual Anniversary Comic, which included memories from the year including us meeting presidential candidates, going camping, and our dearly departed Flappy (among other things). Vivian had a special, and fairly unorthodox gift for me — a Nest smart thermostat I’d been wanting for some time! Now I’ll just have to find a nice day to turn off the air conditioning long enough to install it.

We headed on west to Pine Crest Farms, a cozy little Bed and Breakfast outside of Valparaiso hidden among the trees, wildflowers, and crickets. The empty-nested proprietors (Harriet and Jack and brother-in-law Don) and turned their shady home into a B&B twenty years ago. Vivian and I were their only guests for the night, so we got such amenities as the pool all to ourselves. They even had a lovely gift platter for our anniversary, which included a bottle of sparkling cider from Colonial Williamsburg. It was so good we may have to order a case of it for Thanksgiving. 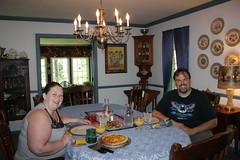 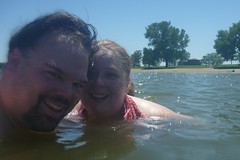 Being a Bed & Breakfast means, of course, that we also got to have breakfast the next day. Harriet made us some lovely quiche with sausage and fruit to start the day. Afterward, Vivian and I took a few dirt roads down to Branched Oak Lake for a swim, which was lovely since the temperatures were now well into the 90s. We found the giant lake to be a lovely spot for a possible future camping trip, and conveniently close to wineries such as James Arthur Vineyards.

We were in absolutely no rush, but we eventually made our way down to Wahoo (the home office of the Late Show) once we got done swimming to have a quick Mexican dinner at Acapulco after finding the perpetually-closed Wig Wam Cafe to be closed once again. After dinner, we did a bit of shopping at a warehouse surplus store around the corner, which had some great deals in their freezer section on deep-discounted guacamole, and pot stickers. We loaded up on frozen food and a few extra gifts for the kids before heading home.

It was a lovely day trip in the country, and aside from the occasional tractor making it difficult to get to where we were going, we had a lovely time. Hopefully we can do it again soon, since I missed out on Wahoo’s Famous Wieners. Maybe next time.