I had a tremendously fun weekend here in Omaha, and I spent some of it bumping into famous people “in the neighborhood.” More on that in a second. 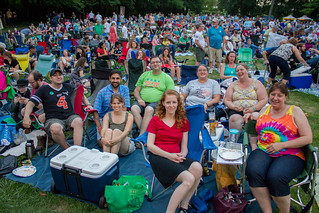 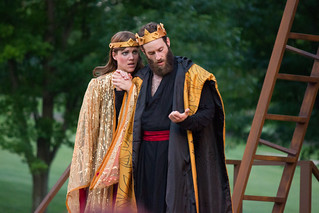 On Saturday, we got to see the final performance of Macbeth with a few of our friends at Shakespeare on the Green. We got to see a Q&A session with the cast, and the kids from Camp Shakespeare performed their own truncated version of the play. Director Vincent Carlson-Brown presented an award to the 500,000th Nebraska Shakespeare attendee, which was a girl a bit too young to take advantage of the free parking space her prize entailed (among other things). They also announced the retirement of the company’s long-time sound engineer Rande Ferguson, who received an award for his 30 years of service.

The show itself was wonderful, of course, with a great musical score and “slow motion” fight scenes that added to the drama. It was much cooler than Taming of the Shrew had been a few weeks ago, with no chance of rain this time, so the crowd was decidedly larger. Among the guests was Nebraska Governor Pete Ricketts, who we bumped into before the show started. There’s something unique about Nebraska, where you can bump into the governor like any normal person on a Saturday night. 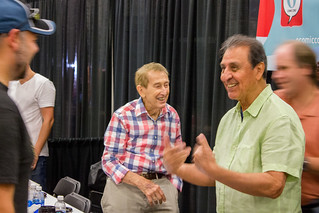 Then on Sunday, I took a fun trip with my dad down to O Comic Con at the Mid-America Center across the river. I went specifically to see Trace Beaulieu and Frank Conniff, who played Dr. Forrester and TV’s Frank (the “Mads”) on the movie-riffing show Mystery Science Theater 3000. They had a Q&A session for guests and plenty of time for autographs and pictures at their booth, and I thanked them both for all the laughs they’d given our family over the years.

Then I discovered, right across the aisle, were Bob McGrath and Emilio Delgado — AKA Bob and Luis from Sesame Street. I’d grown up watching both of these guys interact with Big Bird Oscar the Grouch as a kid, so I said hello and thanked them both for being a part of my childhood. I learned later that both “Bob and Luis” and “the Mads” had gone down to the Old Market to have ice cream at Ted & Wally’s. I only wish I’d been there to get a picture of THAT.