I just finished wrapping up a long week full of birthday that lasted from my actual birthday all the way through Labor Day weekend. Thank you to everyone who helped make it so enjoyable — especially to our grandparents who made certain portions possible via babysitting! 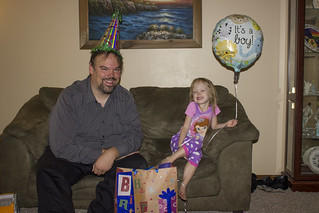 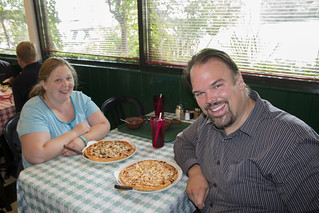 The fun kicked off on my actual birthday, of course. Hannah woke me up with a bag full of presents she picked out herself at the Dollar Tree, which included a plush Shark that now graces my desk at the office. At work, my co-workers presented me with a lovely birthday cake and decorations outside my office door.

Then over lunch, Vivian took me out to Sergeant Peffer’s, a Beatles-themed Italian restaurant in midtown, where we shared a couple pizzas and even a side of anchovies. Then I dropped by Ted & Wally’s for my birthday ice cream, and Vivian gave me her special present — a 12-photo picture frame, which I was able to use to showcase all of my presidential selfies, something I’d been itching to do ever since Tom Becka suggested the idea back during the primary. 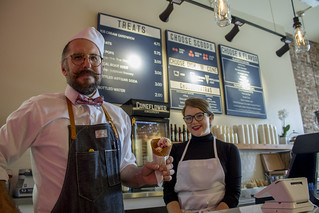 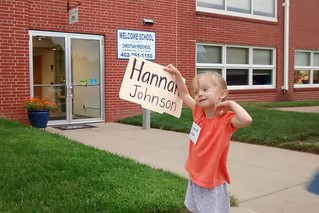 Tuesday marked the grand opening of Coneflower Creamery, the brainchild of our long-time swing-dancing friend Brian Langbehn. He’s been planning the “farm to cone” ice cream shop for some time now, and he even grew a legit ice cream man beard in the process. I dropped in during my lunch break for a sugar cone full of raspberry cream goodness to show my support on day one. Be sure to stop by sometime, but be prepared for a long line reaching out the door!

That evening, Hannah’s preschool had orientation, so she got to play with all her school friends as all the grownups got briefed on the school year ahead. Our little girl is growing up so fast! 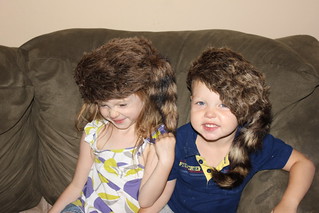 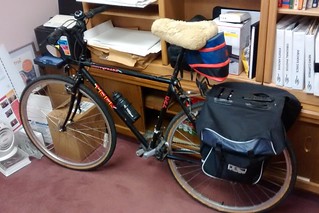 In other news, Jack and Donna returned from their month-long road trip to California and back. They visited friends and family around Fortuna and Yosemite National Park, and they brought back gifts for all of us, including a pair of coonskin caps for Hannah and Aaron.

At the same time, the trusty bike my dad had given me to commute to work finally called it quits. I’d spent just over $100 on new tires and broken spokes, but when it left me stranded for the third time on Wednesday, I’d had enough. Rather than give the bike repair shop $228 to replace a wheel and the same tires I’d bought a few months earlier, I instead paid $100 for a fairly decent Trek 720 I found on Craigslist. It gave me a lovely smooth ride to the office, and I’m looking forward to riding it to work from now until the snow comes (which hopefully won’t be for a while). 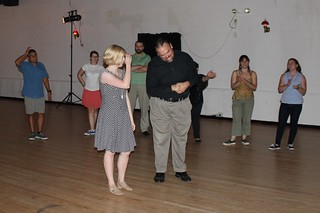 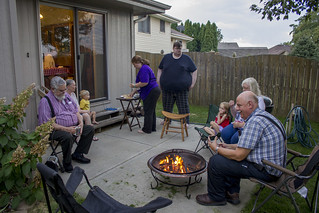 On Friday night, we kicked off a long, Labor Day Birthday Weekend by setting up at JNO and then dancing into the night with the UNO Jazz Band. They had a few singers who performed in the style of Louis Armstrong and the Andrews Sisters, and the band played a great variety of dance-able songs throughout the night. I had my birthday jam as well, of course, and then we grabbed a few pastries at the Donut Stop on the way home to say “thanks” to Vivian’s folks for babysitting.

Then on Saturday, my parents invited all of us over for a dinner of smoked ribs to celebrate the Labor Day Weekend. I made some broccoli salad in between mowing my lawn and my parents’ lawn before dinner time. Then afterward, we went to the patio and roasted some s’mores over Nathan’s fire-pit, which he’d given to my parents a few weeks ago. Aaron got to have his very first s’more, and Hannah got her fill as well before running off the sugar high on the lawn before we headed home. 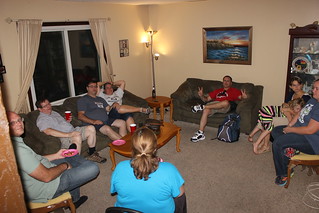 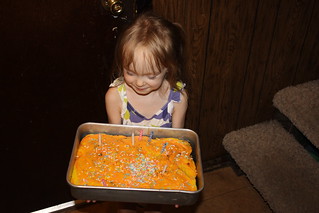 On Sunday Night, we had my “official” birthday party at our house. Hannah spent the afternoon at Grammy’s house decorating my birthday cake herself, and then a handful of my friends brought pizza over to help celebrate. (Sunday was our friend Richard’s actual birthday, so we let him blow out his own candles in a separate ceremony.) I got a pair of MST3K DVD movies from Richard, a six-pack of unique sodas from Phil and Jen, and a lovely bottle of Scotch from Mark. After pizza and cake, we played a few hilarious rounds of Telestrations together while Kate’s girls kept Hannah and Aaron occupied until well after their bedtimes, mostly by building a fort in the basement. (Emma actually joined us in the game as well.) 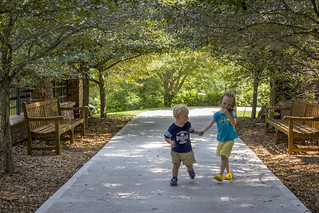 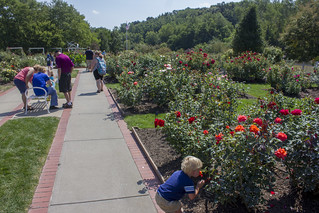 We’d planned on some major downtime on Labor Day Monday, but then Lauritzen Gardens decided to have free admission, so we headed down with the kids see all the flowers in bloom for fall. We usually visit the gardens on Mother’s Day weekend in the spring, so it was a treat to see all the plants and flowers in full bloom before fall truly sets in. That included banana trees with fruit ready to drop in the greenhouse, the rose garden in its full splendor, a corn maze, and a tasting area with stevia, curry, and chocolate mint plants all available for sampling. We also got an extended tour of the miniature train set, which we discovered included models of recognizable Omaha landmarks, including the Woodmen Tower downtown. Then before we left, our friend Jessica from KMTV Channel 3 dropped by to get some B-Roll of Hannah and Aaron for the 4 PM broadcast (which we unfortunately missed).

Now I’m back at work still recovering from my busy birthday week. Thank you everyone for making getting older so much fun!