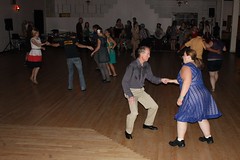 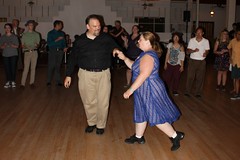 In case you hadn’t heard, Vivian had a birthday over the past week, an event (like mine) that spread itself out over several days with our family and friends. It started, naturally enough, at Jitterbugs Night Out on Friday at the Eagles’ Lodge. This was actually the first JNO all year where we went dancing and didn’t actually have to arrive early to help set things up for the dance. We were even able to put the kids to bed before we left, leaving Grandma on hand just in case the house caught fire. There seemed to be a good crowd that night, so Vivian got to dance with several new people in-between our various jam circles with friends before the night was up. 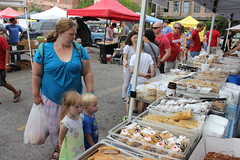 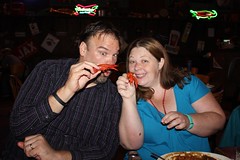 On Saturday, autumn seemed to roar into town with a brief and massive thunderstorm. We took the kids down to the farmers’ market in the morning before the storm hit, grabbing a handful of tasty things like Italian sausage and garlic bread that we would inevitably turn into dinner before the weekend was over. We took the kids by Conagra’s headquarters to climb a few trees and say hello to the “Muffin Man,” and we also saw the water display on the Gene Leahy Mall one last time before winter. It was still feeling like summer before the thunderstorm hit, so we dipped our feet in the blue water before heading for home.

Then that evening, we went out to Jazz for some Cajun food with our cluster of mutual friends. Our friends Phil and Jen shared their giant plate of crawfish, which I was somewhat surprised to see looked exactly like tiny little lobsters, and were essentially eaten the same way. After dinner, we walked a few blocks up the road to catch some Improv comedy at the Backline. They had three sets of comedians on stage to perform skits based on title suggestions from the audience, one of which was “Vivian takes them down,” courtesy of Tamra. That level of personalization made it all the funnier.

As we walked to and from the Backline, Jen pointed out a local speakeasy along the way, which was Looking Glass Cigars and Spirits in the front and The Wicked Rabbit in the back. If we ever drop by the Backline again (i.e. for 88 Improv), we’ll have to try to check it out. 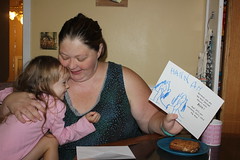 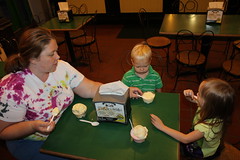 Vivian’s actual birthday came on Tuesday, which started off with Camp Toast for breakfast with the family (prepared with help from Hannah) and then opening some presents from the kids. That evening, I dropped by Beijing Tokyo in Bellevue and got some sushi and a “pu pu platter” for dinner with Vivian. Donna had also brought by a big chocolate birthday cake, which we lit up with candles for Vivian to blow out before we ate some. Then we headed downtown for some obligatory birthday ice cream at Ted & Wally’s (with the kids, of course).

Happy birthday, sweetie! I love growing older with you every year.