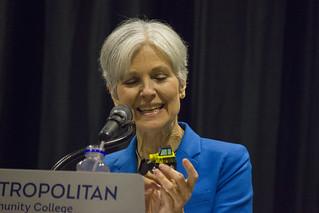 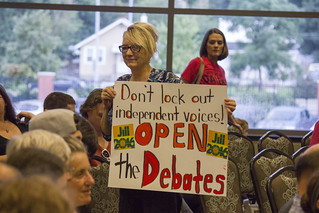 It may seem like the 2016 Presidential Election has been going on since the dawn of time, but it’s not quite over yet. On Wednesday last week, Green Party candidate Jill Stein dropped by to speak at Metropolitan Community College, which was the same day a warrant was issued for her arrest for vandalizing a bulldozer at a Dakota pipeline protest with the words “I approve this message.” Her supporters didn’t seem concerned about this, however, and they even gave Dr. Stein a (graffiti-ed) toy bulldozer to commemorate the event.

A couple hundred people were in attendance, and nearly all of them (by a show of hands) were former Bernie Sanders supporters still hoping for a “revolution” this year. I also saw some familiar faces, including Powerline blogger Dave Begley (you can read his write-up of the event here). I can’t say I agree with much of what Dr. Stein had to say, but she was very nice and met with everyone after her talk (particularly for pictures). In a way, she reminded me of Dr. Ben Carson, who was similarly recruited into politics as an ideologue despite a lack of experience and knowledge of the political world. Hopefully, I’ll be able to see Gary Johnson before the election is over and cross all four major candidates off my list. 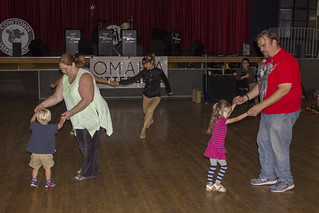 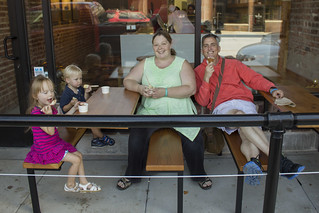 In other news, this weekend was the fourteenth annual Cowtown Jamborama, so Vivian and I had to drop by and participate in the festivities. On Saturday, we brought our kids by for lunch and a little dancing at the Sokol Auditorium, where most of the weekend’s events were being held. Vivian ate Indian food as the kids got to run around a bit, and I discovered that both Aaron and Hannah just loved to dance with mommy and daddy, which warmed my heart.

Afterward, we dropped by Cornflower Creamery for a some ice cream with Uncle Eric. I had a Lindyhoppers’ Delight: sweet corn and black raspberry crisp ice cream with salted caramel sauce and whipped cream. 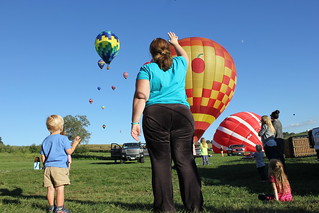 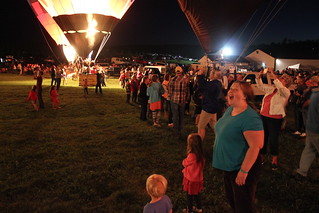 On Saturday night, we headed down to Ditmar’s Orchard with a handful of our friends (and Grammy) for their annual Fields of Flight. We squeezed in with a good-sized crowd to see a dozen or more balloons take flight and then glow after the sun went down. We actually found a “shortcut” to bypass the massive traffic backed up to the Interstate, coincidentally cutting right in front of Phil and Jen along the way. In addition to seeing the balloons fly and light up (up close this year) we also got to go inside one of them with Hannah and Aaron.

We had some food and samples of wine afterward, and both Hannah and Aaron enjoyed dancing like crazy as the live band played before we finally dragged them home. I have a feeling this is going to be another one of our favorite annual traditions! 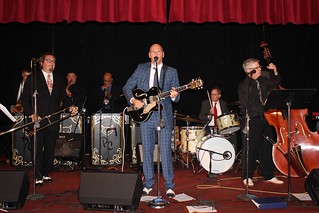 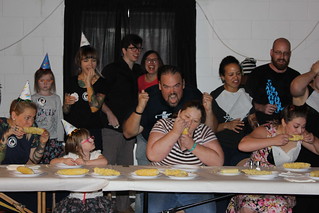 On Sunday, we returned to the Eagles’ Lodge to participate in a corn-eating relay race on the final day of Cowtown Jamborama. This was much different from years past, where instead of eating the most ears in a certain amount of time, teams of four had to eat four ears of corn the fastest. Our team — kernel panic — came in third, but it was still fun to participate. The Jitterbugs also had an adorable presentation with the Itsy Bitsy Jitterbugs, some of whom stayed for the dance, of course.

Then afterward, Omaha’s own Prairie Cats took the stage for a farewell dance. I’ve always been partial to the fast-paced neo-swing sound of bands like the Prairie Cats, so I was on my feet and dancing for nearly every song before the dance was over.

Meanwhile back at the house, Grandma Johnson was getting Hannah to clean her room. That was a lovely little way to finish off the weekend!