We had a gorgeous bit of weather over the weekend, with the cool taste of autumn coming in-between some random storms and a few more dog days of summer hanging on. It gave us the perfect opportunity to enjoy a few autumnal traditions with the kids once again. 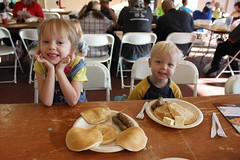 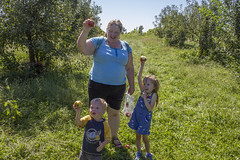 On Saturday was the Applejack Festival in Nebraska City. We’ve been able to take our kids down to the Big Apple every year of their lives so far, starting first with the pancake breakfast at the fire station, of course. I caught a couple flapjacks on my own, and then we said hello to a few friends as we ate and then checked out a few fire trucks before we left. We went by the library to let the kids play in their new “under-the-sea” exhibit, playing in a few shells and starfish, playing dress-up, and finding some pirate booty before moving on.

Then we went on up to Kimmel orchard for a little apple-picking. The crowds are usually overwhelming at this place, but we arrived early enough to get in and out without much trouble. We also got to take a hay-rack to the middle of the orchard, where there were still plenty of crisp apples waiting for our kids to pick before heading out. 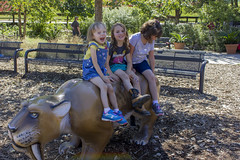 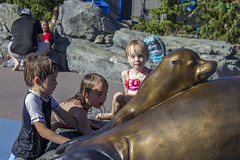 I crashed at home with Aaron for the rest of the day while Vivian took Hannah to celebrate her friend Sammy’s fifth birthday at Henry Doorly Zoo. I didn’t get to attend myself, but from the pictures Vivian took, it looks like there was cake, presents, and a ride on a carousel. Of course, the kids probably had the most fun at the new “Alaskan Adventure splash park” running around in a spray ground built around seals, polar bears, and other various arctic wildlife.

Maybe someday Vivian will update her blog and tell everyone about these events herself. 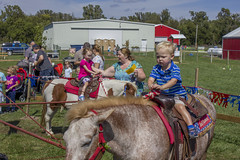 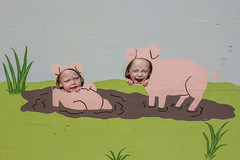 Then on Sunday, we dropped by Gifford Farm for their fall festival. We’ve been a part of their “family” for about as long as I’ve known Vivian, so we bring the kids at least once a year to see the animals and explore the farm with us. This year, they got to ride ponies, see a black chicken, a fluffy duck, and the usual assortment goats, pigs, and other wildlife. They also went on a few slides, decorated a few cookies, rode on the hay-rack, and spent some extra time in the tree house. We actually wound up staying until after they closed before going home to cool off and call it a day.

I still had a busy day ahead of me mowing my parents lawn and watching some MST3K, but I was OK with a little of that to finish off the weekend.