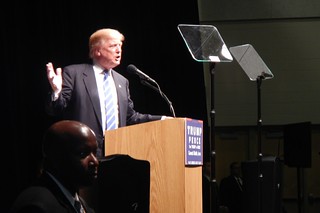 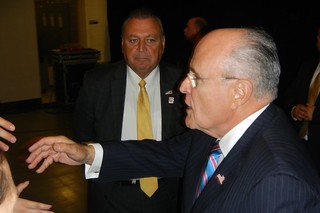 I genuinely thought my participation in the 2016 Presidential Election would have ended way back at the end of the Iowa Primaries. Not so. On Wednesday last week, Donald Trump made a last-minute campaign stop in Council Bluffs, so I dropped by the Mid-America Center with a couple thousand people to get a glimpse of the Donald one last time before November. The crowd consisted of the usual suspects — namely PowerLine blogger Dave Begley and Fake Security Guy jockeying for autographs. To my surprise, only about half the crowd was over forty, and the other half were college-age kids and young families (with their kids in tow). Unlike some of the earlier, rowdier campaign events, this one was safe for the whole family, particularly when security spotted a BlackLivesMatter thug and ushered him out the door an hour or two before the event started.

A handful of people warmed up the crowd before Trump took the stage, including Tana Goertz, Tamara Scott, and Jamie Johnson, who gave an opening prayer. The biggest surprise guest, however, was Mayor Rudy Giuliani, who introduced Donald Trump before he took the stage. Giuliani stayed near the barricade where I was standing long enough to shake hands and sign autographs before he left. As for Trump, he gave a fairly typical stump speech to the friendly crowd. One new addition this time around was a Teleprompter, but from my vantage point, I could read along and see Trump was only using it about a third of the time or less — he would read a few words and then go off on a tangent before getting back on-script. Unfortunately, he didn’t stick around for more than a minute when he was done, leaving some of us who were hoping for an autograph a bit disappointed. 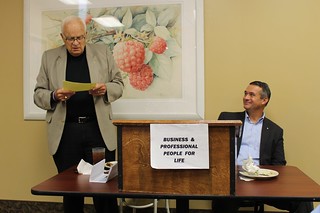 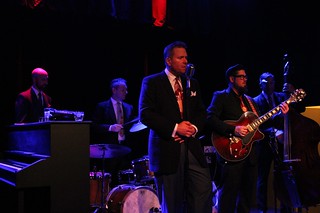 The next day, I had lunch with Don Bacon, retired Brigadier General now running for congress in the second district. I’ve seen him shaking hands at every parade for a year or two now, and he seems to be popping up everywhere to meet constituents and ask for their vote. He gave a brief talk and seemed like the perfect candidate for this election season — a genuine outsider to compete against a career politician like Brad Ashford.

Then that evening, I and a handful of my Jitterbug friends crashed at the Reverb Lounge to see Johnny Boyd and his band. Indigo Swing was one of the very first swing bands I knew by name, and I got to see these guys perform at Cowtown three years ago, which was fantastic. This time, the venue was much smaller and much more intimate. We had only a few feet of space to dance inside the tiny lounge, but that also meant Johnny and his guys were performing just a few feet away from us, which was almost intimidating. I had a dance with nearly everyone there before calling it a night. Next year, I hope to see them again while on tour, and preferably come with Vivian.