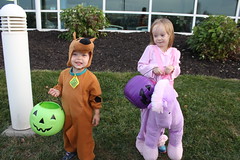 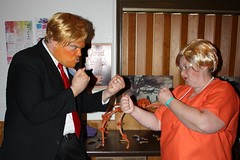 It’s Halloween again, a holiday that seems to be as much for grown-ups nowadays as it is for kids. On Friday night, we took Hannah and Aaron down to the Sarpy YMCA for some trunk-or-treating with various little ones, getting bucketfuls of candy from various folks with decorated trunks. Then we let them burn off some of their sugar high inside a bounce house or two in the Y before we headed for home.

Then mommy and daddy had a turn as dress-up as we headed down to the Eagles Lodge for their Halloween Dance as Trump and Hillary (or The Oompa Loompa Billionaire and Crooked Vivian, if you’re easily triggered). Nate and Lexi came along with us as a double date, though we didn’t get much time to dance with one another outside of the lesson.

Vivian and I weren’t the only Trump and Hillary, but we did take second place during the (RIGGED!) costume contest. We decided to “fight” with one another during the parade around the dance floor, which is what Nate told us sold” it to the judges. Other winners were Homer and Marge Simpson and Bob Ross and a Pretty Little Tree. We also had our shim sham and performance of thriller before calling it a night. 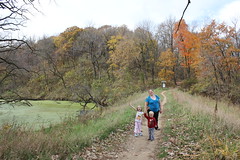 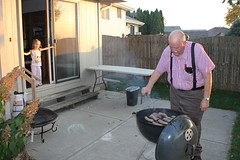 Saturday was delightfully warm for an October day, so Vivian and I took the kids down to the Fontenelle Forest to enjoy being out in nature with so much as a jacket. We walked farther down the trail than we’d never been before, reaching a picturesque little bridge and bond next to the railroad tracks. The kids also had fun along the boardwalk and playing in the tree-house before we headed home.

That evening, we had brats for dinner at my parents house, eating and playing outside until a cold front started moving in. Then we headed back indoors and watched a terribly embarrassing slideshow of me and my brothers growing up. Ah, memories. 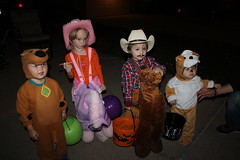 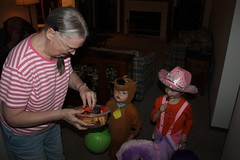 Vivian cooked up a tasty pre-Halloween dinner on Sunday of liver with some fava beans and a nice Chianti (pfft pfft pfft pfft). We saved some of the leftovers for Halloween night, when Jack and Donna came to watch our house as we took the kids trick-or-treating. We stayed mostly in my parents’ neighborhood, where we first went to their house and then rounded the block, filling their buckets yet again with cavity-inducing goodness. I’m hoping we got enough mileage out of their little outfits. They certainly were cute!