The electoral college is meeting today, so here’s one last election-related post before the process officially draws to a close. I’ve posted quite a few times about meeting and greeting various people running for President over the past year, but there’s a story behind these meetings I haven’t told before.

You see, I’m the marketing manager for the Pope Paul VI Institute, a Catholic non-profit specializing in women’s reproductive healthcare. Our founder and director, Dr. Thomas W. Hilgers, wrote a short book in 2014 titled “An Insider’s Look at the War on Women,” which consists of 17 stories of real-life women who came to the Institute for help.

In mid-2015, I went to a event for Marco Rubio and was surprised at how easy it was to walk right up and chat with him. He was one of the front-runners in the polls at the time, but it was early enough in the campaign that one of his rallies consisted of a hundred people having lunch at a Bass Pro Shop. When I heard Ben Carson was coming to town, I had the bright idea of taking along a copy of Dr. Hilgers’ book to hand to him. (Being a doctor himself, I thought Dr. Carson would appreciate it.) The plan went off without a hitch.

As more candidates came to town, I brought more copies of the book along to hand off to them. Before long, I’d been able to pass along copies to nearly every Republican candidate running for president. 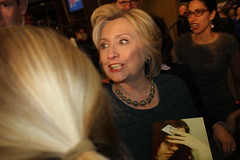 Hillary Clinton’s people pushed the book away as I tried giving it to her.

I’d tried giving copies to Democrat candidates too, of course. Bernie Sanders seemed to avoid me at his rally, greeting audience members along the barricade only to wander away (twice) when he got to me, so I gave a copy of the book to one of his aides. The book came within inches of Secretary Clinton as well, but her staffers physically pushed it aside as she walked by (but not before I got a photo). I even brought along a copy when Barack Obama came to town, but I wasn’t able to get anywhere near him at the event.

At all these events, there were many people seeking autographs, and I quickly learned how valuable a Presidential autograph can be. A $20 book is worth several hundred dollars more with an authentic POTUS’ signature inside the cover. One of my friends from the campaign trail got close enough to President Obama to ask for an autograph at his rally — with two copies of The Audacity of Hope in tow. I asked him if he’d gotten the POTUS to sign them for him, and he told me Mr. Obama actually reached for his pen, but Secret Service told him, “no,” and he put it back. 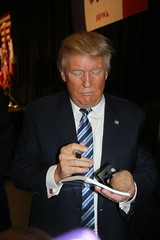 Donald Trump signed the book himself.

Donald Trump was an entirely different story. When I went to see Mr. Trump nearly a year ago, there was a predictable swarm of people pressed around the stage trying to get his autograph at the end of his speech. Fortunately, I knew where to get into position beforehand to get close enough to hand Mr. Trump my copy of the book. He walked the line signing autographs and getting selfies taken for half an hour or more. A guy near me wanted to get a Trump Bobblehead Doll signed, but a Secret Service agent told him that he couldn’t do it. When Mr. Trump came close enough to hear his request, however, he waved off the concerns with his hand and gestured for the man to give him the doll, which he signed.

When I finally got to hand Mr. Trump the book, he actually autographed the cover with his own name. Then, he picked up the book, narrowed his eyes as he looked at the title, and asked, “Whose is THIS?!” I told him, “That’s a gift for YOU, from my boss,” to which he nodded shrugged, and handed the book to an aide before moving along.

So far, I’ve given copies of this book to over a dozen politicians, several of whom now have cabinet positions in the new administration. I’ve never learned if any of them have ever read a single page of the book. I imagine many copies could have been tossed in a recycle bin, but I’m fairly certain that the one I gave to Mr. Trump is still out there somewhere. Donald Trump’s autograph on the book makes it worth actual money, but the irony that the book is titled, “An Insider’s Look at the War on Women” — that’s priceless.