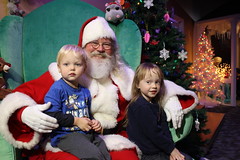 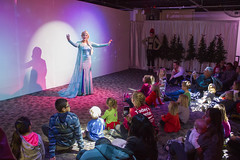 The holiday fun continues for the Johnson Family as we took our kids down to the Children’s Museum on Friday night. They had their usual run of the place, which included the carousel, bulldozer, the “Fantastic Future Me” machine, and a science show involving liquid nitrogen.

Of course, they also had a surprise visit with Santa! The “snow queen” and a frighteningly excited elf were on hand to introduce St. Nick and spread some Christmas cheer with soap suds with the kids. 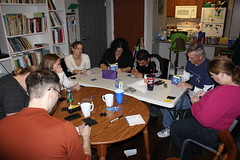 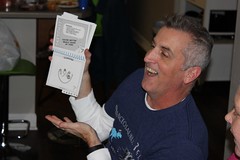 On Saturday, after being warned of a MASSIVE blizzard coming next Wednesday (which never materialized), we got our first actual snowfall of the year. There were just enough flakes to make our house pretty and the roads a bit treacherous. A car in front of us slid off the road and took down a light pole, which we didn’t notice until we ran into it. Fortunately, the car and everyone inside were OK.

On Saturday night, we had a “holiday game night” with Kate and Jessica and a few of our mutual friends. We had chili and potato soup and played a couple hilarious rounds of Telestrations, which included a Party Pooper, a Man Purse, and My Dad (AKA a butler, for some reason). 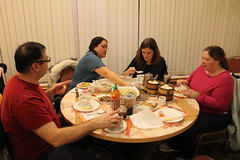 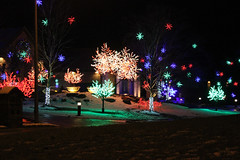 Then on Sunday, we had dinner with Phil, Jen, and Jenny at the Golden Mountain in northwest Omaha, a Chinese place specializing in Dim Sum, among other things. Dim Sum, as I learned, was a bit like tapas, and we all shared in a bunch of dishes that Jen took the liberty of ordering for us: pork dumplings, chicken feet, pan-fried turnip cakes, spicy shredded pork ear, pork and rice wrapped in lotus leaves, and some Steamed Egg Custard Buns for dessert. The food was excellent, but the most fun was just having some kid-free time with a few good grown-up friends.

Afterward, Vivian and I had a brief drive through the Linden Park neighborhood for our annual gawking at the rich people’s Christmas lights before heading on home.

One week closer to Christmas!