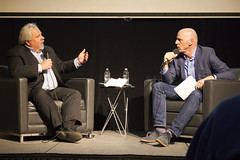 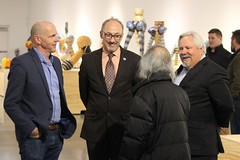 On Thursday last week, Vivian and I spent the evening with Tom Becka and Jeff Koterba, who both gave a brief talk about their careers in broadcasting and editorial cartooning, respectively. The event was held at the Kaneko, which is both an art gallery and studio for Japanese ceramic artist Jun Kaneko (who also attended the event). I was used to rubbing elbows with Tom throughout the Presidential election, and both Vivian and I get to see Jeff occasionally when performing with the Prairie Cats, but this venue was certainly unique. Tom showed clips from “Becka’s Beat” on KPTM, and Jeff showed a handful of his cartoons. They took questions from the audience and then invited everyone to draw our own editorial cartoons and show them to the group.

It was a fun event, but I’ll have to go back sometime to actually look at the gallery itself sometime. We didn’t get to see much more than the room where the talk was held (which contained mostly giant, placid-looking heads). 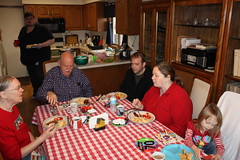 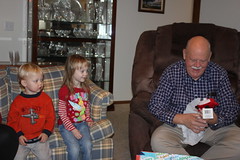 On Saturday, we celebrated my parents’ joint birthday at their house for breakfast. I assembled a breakfast casserole that cooked in the slow-cooker overnight, while Vivian made some bacon and cut up strawberries for everyone. My dad made some crispy “rosettes” with powdered sugar (one of his mom’s favorites), which he’d last made for us seven years ago when we visited in North Carolina. He and mom got to open a handful of presents afterwards from both the kids (which they picked out from the Dollar Tree) and us. Nathan and Jonathan also surprised mom and dad with a giant, new TV (which required a bit of assembly afterward). 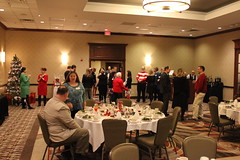 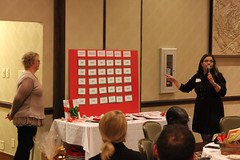 Then that evening, Vivian and I went to the Pope Paul VI Institute Christmas Party together. The party committee did a great job with entertainment, which included a pictorial Christmas Song trivia game and a round of Christmas Jeopardy with all the tables competing for prizes. An a capella group from Roncalli Catholic High School sang to us during dinner, and afterward the fun was mostly done, several employees got some festive pictures taken around the Christmas Tree.

I also gave Dr. Hilgers a special present — a picture of our new President-Elect holding a copy of his book. I snapped this photo myself nearly a year ago after handing the book to Mr. Trump from the autograph line at the Mid-America Center. It had been my goal from the beginning to get that book into the hands of the next president. Mission Accomplished!

(I’m going to have another post shortly about this book and the story that went along with it. Stayed tuned for that — it’ll probably be my last political post for a while.)