Spring has sprung, if the flowers in our yard are any indication. That means bike rides to work and starting my battle once again with the weeds in the yard. Of course, we’re also on that hairline trigger before we switch from heat to AC as the summer months loom around the corner. 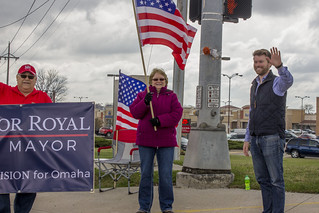 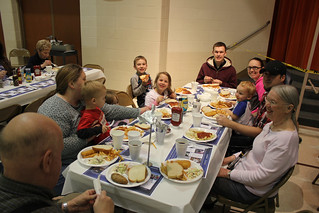 It’s also Election Season in Omaha as the city gets ready to pick a Mayor once again. I spotted young upstart Taylor Royal doing some campaigning on the corner of 132nd and Center on Tuesday last week on Primary Day. The 26-year-old candidate got 11% of the vote and went on to endorse incumbent Jean Stothert.

Meanwhile, Lent is winding down, so we went for one last Fish Fry with my parents and our friends the Mills. This was actually my parents’ first-ever fish fry experience. We went to St. Matthews’ in Bellevue, which was unfortunately not the all-you-can-seat experience I had been hoping for, so some of us were disappointed. On the upside, there was no mile-long line to stand in before dinner, which was just as well since the Mills had to flee to Homeschool Prom, and my parents left as soon as the band started up. Vivian and I let the kids play outside for a bit and rewarded them with the Last Piece of Pie before calling it a night. 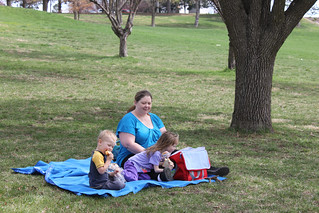 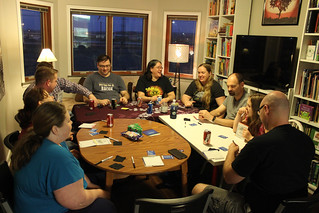 Lots of flowers are blooming all over Omaha in the meantime, including a bunch in our own front yard. On Saturday, we took the kids to Memorial Park to have a picnic under some blossoms and get some quality time on the playground while the weather was sufficiently gorgeous. We also ran into Kaleb and his family for the first time since the Murder Mystery last year. We may have to do one again sometime (perhaps with our kids).

Then that evening, our mutual friend Kate had a game night with a bunch of our mutual friends. We played a few hilarious rounds of Telestrations while having pulled pork and chicken doctored up with some of Phil and Jen’s Insanely Spicy Barbecue sauce. as usual, I was deeply appreciative of having friends with kids, which cancelled out the need for a sitter. 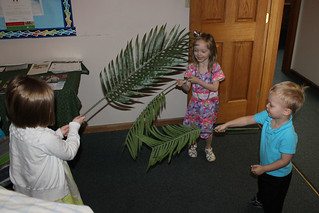 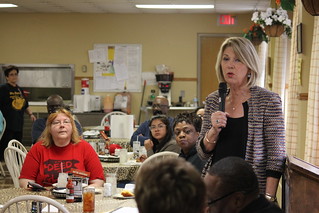 Sunday was Palm Sunday, and I got to round up some palm branches for the kids to wave during the opening song, as nobody else seemed to think about it. We stuck around afterward for a lovely family photo outside, since we were all in our Sunday Best (and I just happened to have a tripod and telephoto lens in the car).

Then on Tuesday, Omaha Mayor Jean Stothert appeared at Big Mama’s Kitchen in a meet-the-candidates event held by “the hungry club.” I dropped in just long enough to grab a picture or two before being pulled away by a few guests who happened to show up at the office while I was away.