We just had a massively fun Easter Weekend with the family here in Omaha, but I’ll set that aside for a separate update to bring you this important announcement: The Mads Are Back! 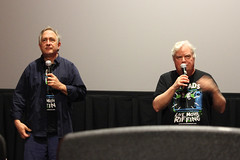 To recap: back between 1988 and 1999 there was a show called Mystery Science Theater 3000, where two guys (The “Mads”) would send a man in space and his robots various bad movies, which they would hilariously riff. The two Mads — Frank “TV’s Frank” Conniff and Trace “Dr. Forrester / Krow T. Robot” Beaulieu — are now back and touring the country to do live riffing for audiences. On Saturday night, they riffed Glen or Glenda for what looked like a sold-out theater full of MSTies. My buddy Richard and I got tickets in the front row for the show, and we wound up sitting in Frank and Trace’s seats by accident. (Who knew there was a “row zero?”) 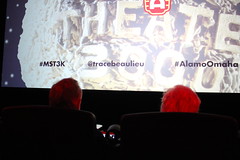 I got to meet Frank and Trace back last summer at O Comic Con, but this experience was like none other. It was truly surreal to see Frank and Trace’s silhouettes right in front of me riffing the show just like Mike/Joel and the Bots did back in the day. Even cooler, the Mads stayed to meet and greet pretty much everyone who came to see them, signing autographs and having pictures taken with guests — quite patiently, I should add, as the guy I grabbed to get our picture couldn’t seem to find the button. (I resisted the temptation to say, “push the button, Frank.”) They had merch too, of course, so I made sure to get myself a snazzy T-shirt to commemorate the event. 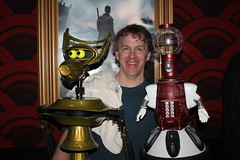 They also had a Q&A session after the show, so I got to ask which comedians Frank and Trace liked best (Frank rattled off a list that included Greg Proops, Louis CK, and Patton Oswald, among others).

I also got to meet several fans of the show after the show and while waiting in line. One guy brought his own homemade Krow and Tom Servo to be autographed. A youngster next to me in the theater (who asked Frank about life in Second Banana Heaven) also reminded me how this show seems to be picking up fans in new generations who weren’t even born when it was cancelled back in 1999.

Of course, I also went to RiffTrax live with a few friends at the Twin Creek theater to see a live telecast riffing of Samurai Cop courtesy of Mike and “the Bots” in Nashville. Maybe one day I’ll get to see them live as well. In the meantime, there’s a whole new MST3K series on Netflix now that I’ve yet to watch. I might have to catch that Next Sunday A.D. 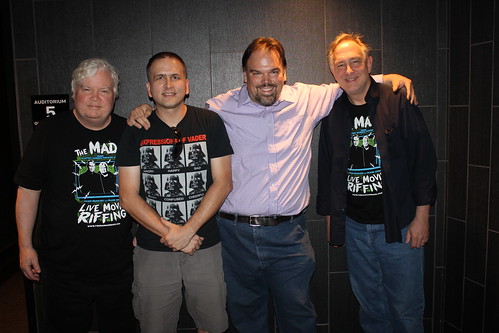 What do you think, sirs?