It’s been a fairly busy week for the Johnson Family. Between daily swimming lessons with the kids, a brief visit with Uncle Andy and Aunt Nancy, and a night off to see some RiffTrax Summer Shorts at the theater, we’ve had something going on nearly every night even before Father’s Day weekend got started. 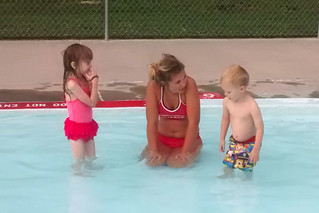 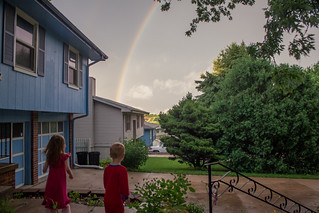 On Friday night, I took the kids to their daily swimming lesson just as some severe weather started rolling in. Fortunately, Hannah and Aaron both got some swim time by doubling up with their lesson together before some approaching lightning shut the pool down.

I took the kids home to settle down for bed, and just as I was telling Hannah her bedtime story, the sirens went off. I hustled the kids downstairs to the basement to watch some TV as I checked the green sky outside. There was thunder and rain for about half an hour, but nothing strong enough to do more than knock a few sticks out of our tree. I got the kids back in bed a second time after things settled down, but then Hannah was up moments later exclaiming, “Daddy! There’s a RAINBOW!” Naturally, I took the kids outside to see the rainbow for a few minutes before rounding them back up inside.

The storm itself was much, much worse for folks just to the south of us. A few people lost their homes, thousands more were without power, and there were enough downed trees and limbs to fill an endless line of pickup trucks leading to the dump the following day. More than one trampoline also lost its life this day (but fortunately, no people). 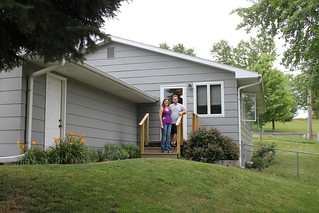 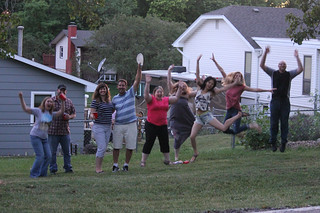 On Saturday, I had an early breakfast with my dad and gave his lawn a mow before watching a new episode of MST3K (#1113: The Christmas that Almost Wasn’t).

Then that evening, we went to Jenny and Kody’s new house for a housewarming. Kody made some pork loin (with the help of a garden sprayer) and a bunch of our mutual friends — and their kids — came by to eat, swing some hula hoops, and jump for joy as the sun went down. This was actually the third of Jenny’s housewarming parties that I’ve been able to attend, the other two for a rental house and an apartment she had before getting married two years ago. 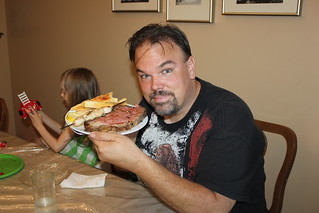 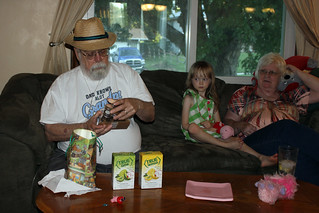 Sunday, of course, was Father’s Day. Hannah and Aaron woke me up with a muffin, coffee, and some hand-made cards. Hannah also put on a Daddy Day show for me with her toys. I dropped by my dad’s house to give him a gift or two before spending the day relaxing by fixing a lawn sprinkler, trimming back some trees, and playing Mega Man 2. Then at the end of the day, Vivian made me a surf-and-turf feast for dinner — prime rib, scallops, and yucca with a Crab Louie salad filled with shrimp and crab. Jack and I both got a few lovely gifts afterwards topped off with some peanut butter chocolate pie once the kids were put to bed.

It was a wonderful, delicious day. I’m just glad there are leftovers. Thank you for making me feel so loved, Vivian (and Hannah and Aaron)!