Summer’s here now, with temperatures creeping into the 90s, which made for perfect weather to chill with the kids in a lawn sprinkler at Grammy’s house or at the local splash park after a bike ride home from work. Of course, it’s never too hot to have some of grandpa’s cheesy bacon grits, even after mowing the lawn. 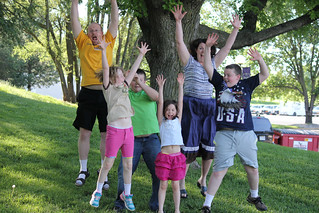 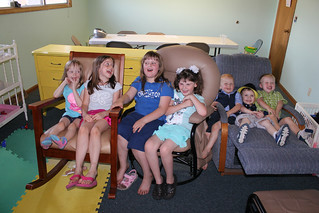 On Sunday after church, Pastor Ryan and his family received a gift that could only happen in Nebraska: three boxes of beef from ¼ of a cow! Now, we just have to find a way to help him grill and eat all of it.

Then on Sunday night, we had a reunion with our old pastor Drew Rietjens and his family, who had come back to Bellevue to say hello. Our cluster of kids got to have some fun playing together once again as the grown-ups ate and caught up with one another downstairs. 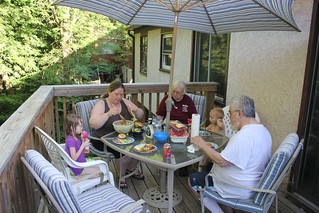 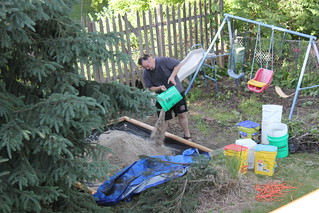 Grammy and Pop-Pop had us over to have burgers on the deck on Monday night, giving the kids (and daddy) the chance to run in the sprinklers for a bit.

Grammy and Pop-Pop had us over for dinner on the deck on Monday night, giving the kids (and daddy) the chance to run in the sprinklers for a bit. We also picked up a few loads of sand from neighbor Toni for a new sandbox that Vivian and I (and Grammy) have been putting together for the kids in our backyard. It turned out to be a fairly extensive project requiring multiple days of hauling sand buckets, nailing wood, and clearing weeds from our backyard. It should be a fun place for the kids (and Zoey) to play during the summer once it’s done.