It’s been nine lucky years since Vivian and I first tied the knot, so we decided to celebrate by spending the day down the road in Lincoln getting some sun and getting stuffed (per the norm). 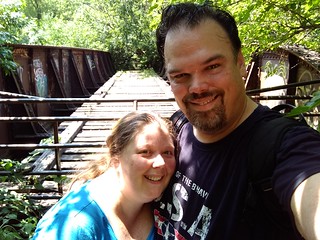 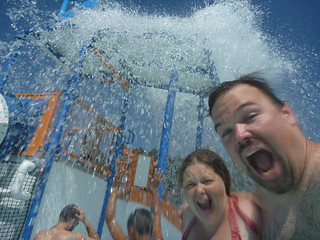 We started the day exploring Wilderness Park, home to the Secret Bridges and also the “Devil’s Gate,” which I only recently learned about online. The whole area had been a kind of retreat for Methodists around the turn of the century but had since been turned over to the city as one large, meandering park. After some quick lunch at D’Leon’s, we checked out the Gate and then tried finding our way back to the Secret Bridges, but it had since become nearly unrecognizable, overgrown with trees and foliage and a new barricade that made it much harder to traverse. (A stopped train didn’t make it any easier, either.) We only got as far as the first bridge for a selfie before giving up.

We spent the rest of the afternoon down at Star City Shores, a water park built back in 1996 that I wasn’t really even aware of until now. They had a few water slides, and a giant, water-dumping bucket that kept us cool as temperatures climbed into the upper 90s (with enough humidity to push the heat index well above 100). 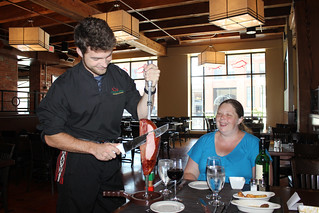 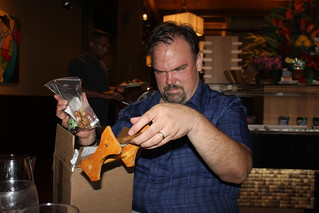 Then that evening, we had dinner at the Rodizio Grill in the Haymarket. It’s a “Brazilian Steakhouse” that specialized in serving you an endless parade of meat carved tableside — ham, sirloin, chicken, ribs, and a dozen other options all cooked via rotisserie and served until you tell them to stop. If that weren’t enough, they had a salad bar that included such items as seviche and four-cheese mac and cheese (with bacon) that could have easily served as a meal in itself. Throw in a series of endless sizes (which included fried polenta fries) and we were pretty much stuffed from the word “go.”

Vivian and I had anniversary gifts for each other as well. I got Vivian a hand-thrown cheese plate and a voucher for a paint-your-own pottery place in La Vista. Her gift for me was an amazing make-your-own Scotch kit, complete with barrel. That’s going to be fun to try out!

Of course, I also had my ninth Anniversary Comic, featuring all the fun we’ve had with our friends, family, and each other over the past year. Thanks for making so many memories with me, sweetie! I can’t wait for Year Ten.