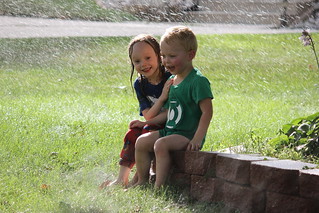 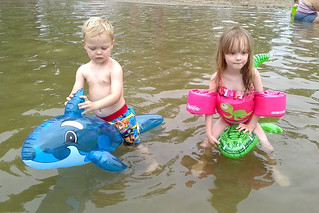 Hot enough for you? Yes, it’s July in Nebraska, which means steamy summer days and trying to find ways to stay cool other than boarding up inside the house with air conditioning. This is why we have sprinklers in the front yard, which Hannah and Aaron made use of on Thursday.

On Saturday, we took a trip down to Louisville to cool off in the lake. We brought along an inflatable alligator and killer whale for the kids to float around on, and then we stayed just long enough to have some lunch (and a little sunburn) before heading home. 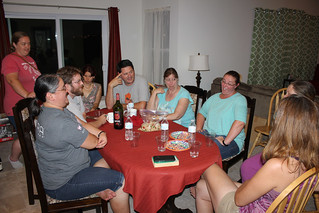 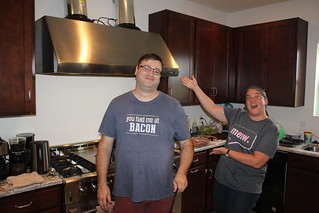 Then that evening we dropped by Phil and Jen’s new house for a little Housewarming Party. Naturally, they had a bunch of unique food, including some bacon toffee and other things made in their giant, industrial strength stove. They also made some coffee in a strange glass vacuum brewer, which looked like an odd science experiment or drug paraphernalia. The coffee it made was good, though.

The usual batch of our friends were there, and Hannah got to have some quality time going crazy with Kate’s girls before we called it a night. 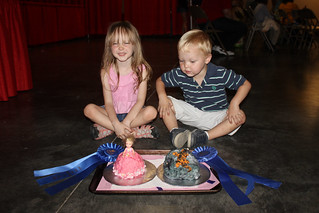 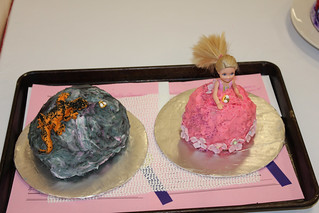 Then on Sunday, I took Hannah and Aaron to the River City Confectioners’ Association Annual Sugar Arts and Cake Show. Hannah and Aaron had each made some prize-winning cakes and stuck around to collect their blue ribbons (along with prize lambs and some cookies).

There were several other unique entries, including a Cinderella Cake, a Fast Food cake, a cactus, some literary characters, and a detailed living room set that was made entirely out of sugar (even the glass ship-in-a-bottle). Vivian even made a cake topper, which she brought home on Friday night.

It was back to work after that, which included short-circuiting the Civic. Fortunately, I just needed a new battery and a fuse replaced after that mess.