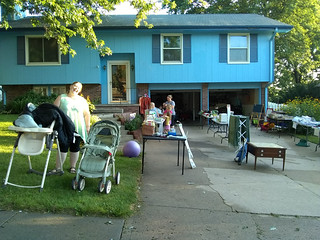 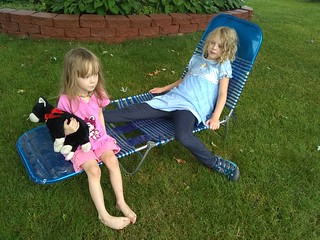 It’s been a massively busy week or two for the Johnson household, much of it spent getting ready for and hosting our very first (and probably last) garage sale. We spent several weeks collecting things to sell, pricing them all, and then arranging our makeshift driveway thrift store on a series of borrowed tables in our garage. It’s been a miserably hot July so far, but thankfully there was (almost) no rain during our three-day garage sale. We were able to make a couple hundred dollars parting with a collection of household items, all of which will be going to help fund Hannah’s schooling this year (which will either be at Cornerstone Christian School or homeschooling, depending on what financial aid may or may not come through). Our mutual friend Kate had an assortment of things to sell as well, so she and Vivian tended to the shop on our driveway as Kate’s girls played with Hannah over the course of three days. After the garage sale ended on Saturday, I got some extra steps on my FitBit walking the kids to grandpa’s house to mow his lawn and have some smoked chicken for dinner.

The whole garage sale was an exhausting exercise in decluttering and learning how much old belongings are really worth when you put them on your driveway. We likely won’t be doing this again, however, because we’ve learned since the sale that an Espresso maker that wouldn’t go for $3 on our driveway can somehow get sold for $15 once we put it on the “buy/sell/trade” group on Facebook. Hooray for online capitalism! 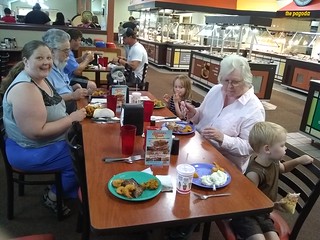 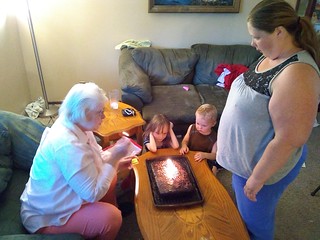 Then came Grammy’s Birthday, which (as always) happened two days before our wedding anniversary. The whole family went out to Golden Corral to get stuffed with shrimp tacos and steak, among other things. Then at home, Grammy opened some of the presents we’d bought her, which included a large plastic car-shaped jar full of individual tubs of gelatin, which I picked up at an Asian food market (along with Dragon Fruit — because you can’t not try something that crazy and colorful). We also had a giant, chocolate birthday cake that Hannah and Aaron helped to decorate, so we all got nice and sugared up before heading off to bed.

Things finally started to wind down mid-week as Vivian and I prepared for our nine-year wedding anniversary together. More on that in the next update.