On Saturday last week, the whole Johnson Family had a fun, jam-packed day down at O Comic Con at the Mid-America Center. This was just the third year O Comic Con has been held (ironically in Council Bluffs), but it was the first time all four of us took advantage of crossing the river and exploring this venue. 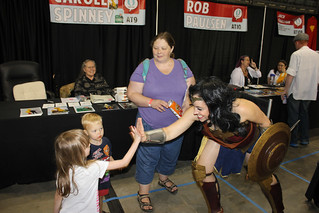 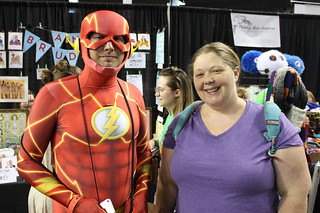 O Comic Con is a relatively small convention, particularly compared to some of the others I’ve been to, but that’s part of the appeal. The lines were short and it was remarkably easy to get in and see everything that was going on. The vast majority of people who attended did so in costume, dressed as superheroes, anime characters, Jedi, and other random creatures. There were plenty of people selling superhero merchandise, and several comic book folks filled in the booths in the main arena.

It was a very family-friendly event, with activities from Hannah and Aaron like decorating their own cardboard armor or playing with Legos. They had the most fun, however, with the yarn-knit strawberry and carrot we bought for them from a vendor. 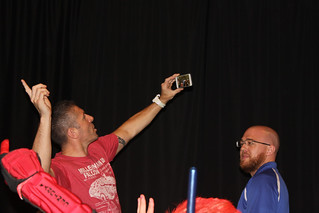 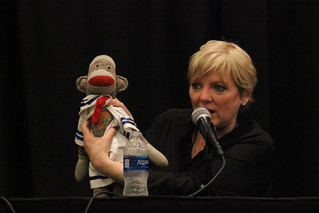 My favorite part of the event, of course, were the celebrity guests, most of whom came from various TV shows and movies I’d seen in my childhood. These included Darth Maul from Star Wars: The Phantom Menace, Rob Paulsen from Animaniacs, Jonathan Lipnicki from Jerry Maguire and Stuart Little (among others), Non from Superman II, Nellie Oleson from Little House on the Prairie, the original blue Power Ranger, Courage the Cowardly Dog, and Big Bird from Sesame Street. Our kids got to meet all the celebrities along with us, but they couldn’t quite appreciate how the Caroll Spinney was actually a giant yellow Muppet or that Rob Paulsen was actually a cartoon character.

The Q&A sessions were the most fun for me. Ray Park spoke to a packed room about his time doing The Phantom Menace and even demonstrated swinging a light-saber with one he borrowed from an audience member. Several of the actors still keep in touch with their old cast members. David Yost said he would be spending the weekend at Amy Jo Johnson’s beach house. Alison Arngrim fights with Melissa Gilbert on Twitter, and Rob Paulsen had Tress MacNeille to one of his kid’s birthday parties. Yost and Paulsen both also mentioned hearing from fans that their shows were bright spots in an otherwise dark childhood, which was kind of sad. 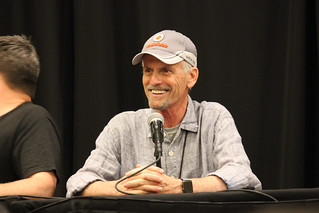 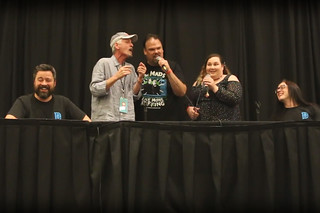 The highlight of the day (and the weekend, and maybe the year) for me was Rob Paulsen’s Q&A. Paulsen is the voice actor behind many cartoon characters, including Yakko Warner from Animaniacs, who is also known for singing the Nations of the World song. I managed to learn this entire song to amuse a two-year-old Hannah when pushing her in her swing, so I’d been dying for the chance to sing this on stage with Rob Paulsen ever since I’d learned he was coming to O Comic Con. He actually invited both me and another guest on stage to sing the whole thing, which we were together at the end of the Q&A. You can see the whole, crazy video below. At the end of the song, Paulsen also sings a brand-new bit that includes many of the countries that either didn’t exist when the first song was written or were somehow left out. Check out the whole thing and be amazed!

This actually happened. Thanks to Spotlight Omaha for recording it.

It was a long, fun day, but I’m very glad we went and can’t wait to see which guests they have in store for next year. In the meantime, we’ve got a garage sale to make happen.