We just wrapped up a long, fun, and very busy Independence Day weekend, which featured several outdoor activities that were bombarded with rain at one level or another. 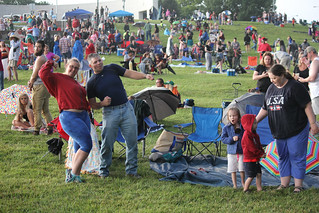 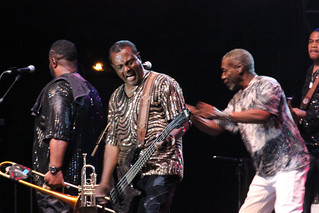 First came the Bank of the West Celebrates America concert at Memorial Park. Kool & the Gang, who we had seen last year at Loessfest, were the headliners of the evening. We grabbed our spot on the green along with the West Family and around 60,000 other people (and Takashi) as emcee Nikki Boulay kicked off the evening. A line of ominous clouds gathered on the horizon as opening act, the Emmett Bower Band, sang country songs about beer. Then the Confidentials took the stage just as a thundershower broke, quickly drenching everyone on the green for half an hour and driving away a fair chunk of concert goers.

Those of us who weather the storm, however, were treated to a double rainbow at the end, followed by Kool and the Gang. It was the first time I’d seen the same band twice at one of our free outdoor concerts, and it was fun to hear a different mix of the songs than the ones they played last year (though they finished off with Celebration, of course). The kids were more interested in the fireworks and playing with their new bubble gun, but everyone had a good time, despite getting drenched. 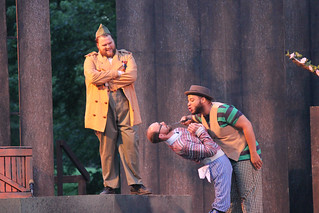 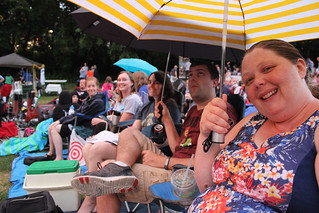 The next day, we returned to Elmwood Park for another night of Shakespeare on the Green, this time featuring the Merry Wives of Windsor. There was a much bigger crowd this week, but I was still lucky enough to snag a spot near the front. Tamra, Lydia, Anne and Brandon joined us on our blanket to share in a lovely spread, and pesto bread before the show. There was also a brief Q&A with a few of the actors, and then Editorial Cartoonist / Swing Band Leader Jeff Koterba took the stage to kick things off.

The play itself was very good, and a little more risqué than I would have expected for a Shakespearean comedy. The forecast called for clear skies for the evening, but halfway through the first act, it started to rain once again. The actors paid no mind, of course, but several members of the audience took off before the rain cleared up around intermission. A few stagehands mopped the stage, and the cast finished off the play without a hitch (that we could tell). 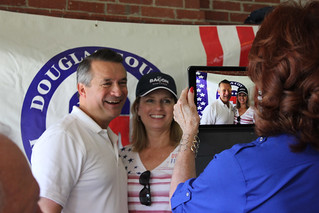 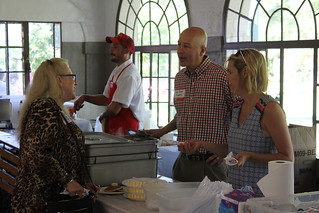 Then came Independence Day, which fell on a Tuesday, happily interrupting our 40-hour work week. I kicked off the day claiming a spot on the parade route for the Ralston Parade, and then I dropped by the pavilion at Elmwood Park for pancakes with the Douglas County Republican Party. Mayor Jean Stothert, Governor Pete Ricketts, and Congressman Don Bacon were all on hand to meet and greet, take photos, and serve up food. Ian Swanson from AM 1420 was also there rubbing elbows with County Chair Jon Tucker among others, and I even bumped into Bellevue Mayor Rita Sanders, who was out for a bike ride with her husband Mike.

There was also a car show going on in the parking lot, so I walked past a few classic cars, and I also took a minute to check out the grotto, which was created when Elmwood Park was first built, which had a natural spring neatly hidden away from street traffic. 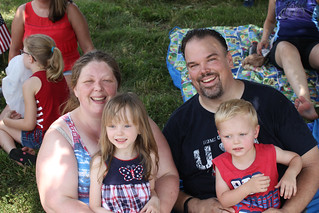 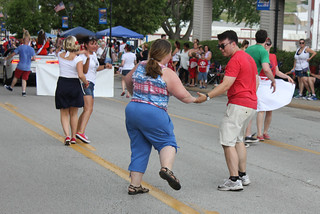 I headed home to cool off with the kids for a bit before we returned to our spot for the Ralston Parade. Jenny and Kody joined us on our blanket as we got to watch the usual batch of clowns, roller-skaters, Shriners, bands, stormtroopers, and jitterbugs make their way down Main Street. A real-life troll from some left-wing group (who also trolled Sen. Fischer’s town hall) actually followed Don Bacon’s entourage to harass him, but the congressman took it in stride.

Halfway through the parade, it started raining once again. We huddled underneath a tree and stayed relatively dry through most of it, and even though the rest of the parade wound up getting drenched, they kept on marching through it all. We dropped by Dairy Queen afterward for some ice cream (along with the Jitterbugs) before heading back home. 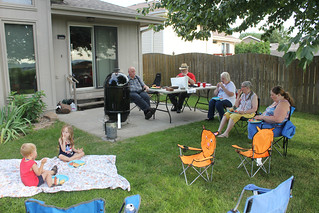 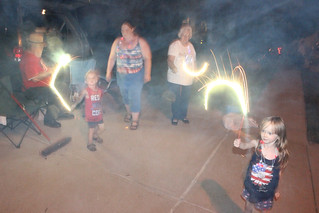 Then that evening, my parents had us and Vivian’s folks over for some dinner and fireworks. Vivian and I brought along burgers and hot dogs, and Donna brought some lemon lasagna for dessert. We ate outside, which was lovely and cool after the rain on our parade.

Then after dinner, we took to the driveway to set off some fireworks along with the rest of the neighborhood. We had a modest number of fountains, sparklers, and artillery shells in our arsenal, but our fireworks were dwarfed by our neighbors’ who had a whole series that rivaled what we’d seen on Friday night at Memorial Park.

All things considered, it was a super fun weekend. Next year, however, we’ll have to remember to bring our umbrellas, no matter what it says in the forecast.