It’s officially fall again. The kids are back in school, and mom and dad are starting Bible Study Fellowship once again (as they go through the book of Romans). I’m just trying to catch my breath so this week, that meant Sushi. We’ve had a bunch of visits from migrating butterflies, and Hannah also got a cute new haircut. 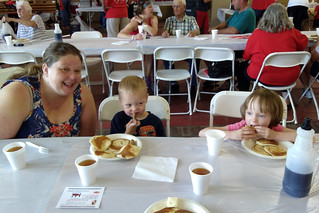 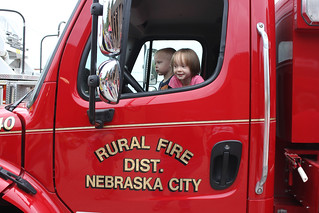 Meanwhile, we took the kids down to Nebraska City for our annual apple-picking trip. We started things off with pancakes at the firehouse served up by the Pancake Man (and Mrs. Nebraska). This was Hannah’s sixth consecutive Pancake Breakfast in Nebraska City, and we won’t be breaking tradition anytime soon. Daddy also got an Applejack T-Shirt in time for a family picture, and we bumped into a few of our friends as we looked at the fire trucks on our way out the door. 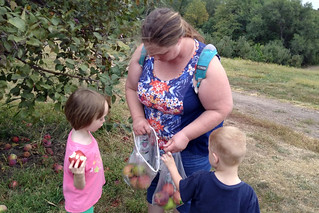 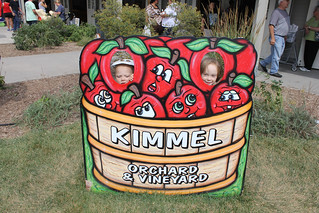 We walked down to the library to get some new books and let the kids play with a bunch of blocks at their Block Party exhibit. We were able to wait out a few passing showers inside, and they had all passed by the time we left (though plenty of puddles were left behind to splash in).

We went up to Kimmel Orchard next, getting some ice cream and looking at a few bees before taking the hayrack up to the orchard. The kids excitedly picked enough apples to fill two bags (pecks?) before we headed back. There were plenty of other activities at the Education Center, such as a large checkerboard and a table to make paper plate masks. Bruce Arant, author of Simpson’s Sheep Won’t Go to Sleep! was on hand signing books (including one for our friend Lexi). There was also a large playground area under construction that we’ll probably have to check out next year. We headed home tired enough to do nothing for the rest of the day (though I did pop open a glass of apple cider wine before bedtime). 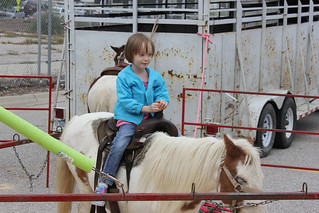 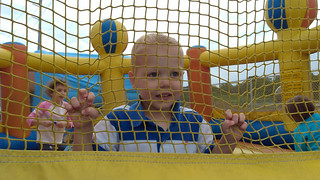 We had an extra bit of sun on Sunday afternoon taking the kids down to Metro Credit Union’s annual “Memberfest” event on Saddle Creek Road. We got some hot dogs for lunch and then the kids got to bounce in the bounce house and ride a few ponies. Hannah also got to go up an inflatable obstacle course / slide, though she wound up waiting in line a while as the other kids didn’t scale the thing quite as nimbly as she did. The weather was nice and cool for it well before heating up again later in the week.

Things are still busy at work and home, but we still squeezed in some park time as well. (And Dim Sum.)