Hello, autumn! Aaron is now in preschool, and Hannah is starting her first year of homeschool Kindergarten. Even so, we still have time for a trip to the park every now and again, and that also means Dim Sum for lunch. 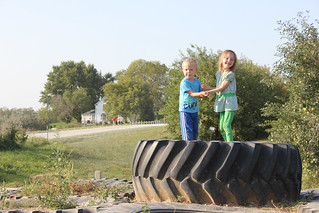 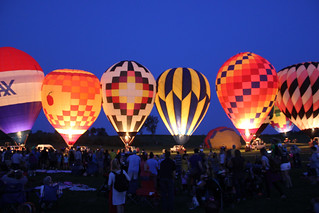 On Friday night, we headed down to Ditmar’s Orchard for new autumnal tradition — watching balloons at their Fields of Flight event. Hannah and Aaron got to play on the playground for a bit before the handful of balloons inflated and took off. Local band “Clean and Easy” played some songs as the sun went down, and we had some apples, donuts, and cider for dinner as the balloons came back to glow. They opened the barricade and let everyone some and get a close-up look at the balloons as they fired away, which was especially fun. Jon Paper watched with us, as did Aunt Jessica and Kate’s three girls, who kept Hannah and Aaron company. 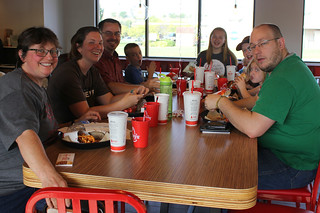 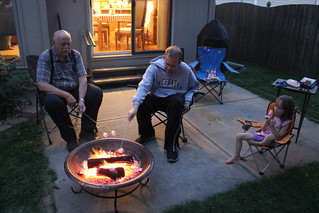 Vivian had a retreat with some of her female friends over the weekend, which gave me plenty of quality daddy time with Hannah and Aaron. We spent Saturday Morning crashing at the local Arby’s, which had some kind of grand re-opening where the first 50 customers got free Arby’s for a year. That’s right — 52 meal coupons for everyone who dropped by to get a combo meal, and I was one of them. There were surprisingly few people there to take Arby’s up on the offer when I arrived around 8:30. I called my dad to let him know, and his reaction was, “I don’t know…Arby’s?” Pastor Ryan spread the word and brought a card table to play games with others as we waited for the doors to open. Chloe also tried teaching Hannah to play SkipBo, but she wasn’t that interested. The doors opened before long, and we all got our coupon books along with Roast Beef sandwiches for everybody. Not sure if anyone has survived eating Arby’s for a year. I guess we’re about to find out!

That evening, I went to mow my parents’ lawn, and then dad broke out the fire pit for us to make some s’mores once the sun went down. Uncle Nathan even dropped by to roast some marshmallows with us before we headed home. The next morning, the kids and I attended Thanksgiving Lutheran Church with my parents. This included donuts afterward, which the kids seemed to appreciate. It was also grandparents day, so it felt appropriate to celebrate a bit with Grandma and Grandpa Johnson to finish off the weekend.