Vivian turned a year older this week, and that means we celebrated in the only way we know how — with lots of fun, food, and FIRE! 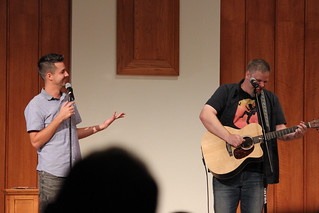 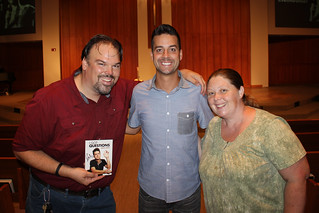 The fun started on Friday night, when Vivian and I went up to “El Corn” to see Christian comedians John Crist and Jonnie W at Bethany Lutheran Church. It was a hilarious show and proved to me that comedy that’s “clean” can wind up being even funnier (and edgier) than “blue” comedy. Vivian and I were both familiar with Crist’s work online poking fun at Christian music, Christian stereotypes, and Millennials. Jonnie W was just as funny, working a bit of guitar into his act and reminding me of Tim Hawkins, who he and Crist both performed with in the past.

What I liked best was how both comedians stuck around afterward to meet-and-greet fans, signing autographs and taking pictures. I bought a DVD from each of their merch tables just for that. 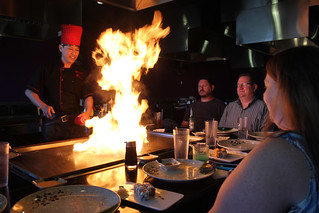 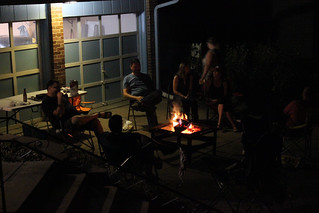 Then on Saturday, Vivian and I went out to Sakura Hibachi and Sushi in Council Bluffs for dinner with a handful of our friends. We got some sushi and tempura before watching watch Chef Herman serve up some calamari, steak, and other meat and veggies for us with his usual flamboyant show. There was egg-tossing, an onion volcano, and even a bit of sake squirted around the table. Vivian also got to put on a chef’s hat for a moment to throw an egg on the floor before dinner was served.

Afterward, we returned to our place to fire up our fire pit in the driveway for a bunch more of our friends who came to share in its happy glow. We didn’t bring out the s’mores, but we did have plenty of chocolate cake, courtesy of Donna. Even Hannah got to stay up a bit and get in some fire time before bed. It was a lovely evening, and we’ll have to break out the fire pit again sometime when it gets even colder. 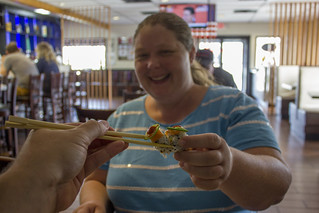 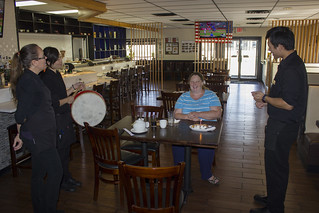 On Vivian’s actual birthday, I took her out to lunch at Umami, a hot new sushi place on Galvin Street (inside what had previously been an unloved former KFC). It made headlines as the “pet project” of Chef Keen Zheng, a sushi chef from Manhattan who was convinced by some local friends to bring the “New York City” sushi experience to Omaha.

Vivian and I got a handful of tasty specialty rolls along with some tempura, all of which was delicious. I particularly liked the Manhattan Roll and the Naruto Yellowtail, which used thinly-sliced cucumber instead of rice or seaweed. Even the wasabi seemed uniquely special, creamer and milder than the stuff found nearly everywhere else. The staff brought out some bananas tempura and sang “happy birthday” to finish off our special birthday lunch together. 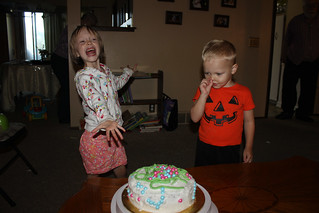 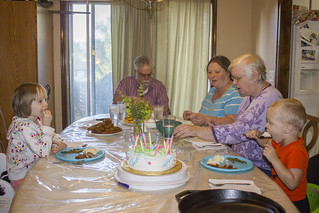 Then that evening, Jack and Donna came by to make Vivian a special dinner of breaded pork chops, potatoes, and biscuits. The kids also got to decorate a chocolate mint birthday cake, and they even adorned it with candles for mommy to blow out after dinner. Vivian got to open a few presents, including a plush cockatiel, a t-shirt, and a few new books.

Then Grammy and Pop-Pop put the kids to bed as Vivian and I went off to see Wonder Woman at the Westwood 8. It was a “private screening,” since we were the only ones in the theater when it started. The movie itself was very good, and even though it came out on DVD this week, there’s nothing quite like seeing it on the big screen. It’s particularly nice that we still have a “dollar” theater showing blockbuster films from a few months ago when the current movie selection in autumn is usually downright horrible (the old-school sci-fi lights and even the decorative theater doors were fun as well).

In other news, my dad had his 50th high school reunion and returned to Woodland, California to catch up with his old high school buddies. Sammy also had a birthday of her own, celebrating with a bead party and flowery cupcakes from Donna. In the meantime, I’m happier than ever to be growing old with my lovely wife. Happy birthday, Vivian!