Labor Day Weekend brought us some reasonably nice weather to finish off the summer, and the Johnson Family got to spend it camping just a few miles down the road in Louisville with our friends, the Mills. We arrived right around sunset (a gorgeous red one, in fact) on Friday night to set up our tent before it got completely dark. The whole campground was booked for the weekend, but our part of the park was still relatively empty. We got to see (and hear) some Spooky Owls after the sun went down, and then Vivian grilled up some burgers and some potato casserole before we started getting set for bed.

(For anyone planning to camp overnight in Louisville, be prepared for an endless series of trains to keep you company with their whistles all…night…long…) 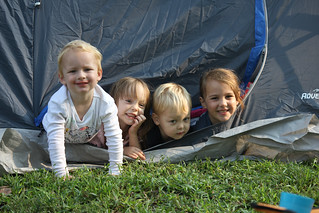 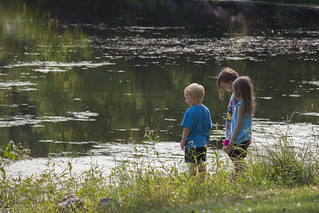 The next morning, the kids had some fun playing in our tents as Lexi scrambled some eggs for breakfast along with bacon from the Mills’ own pig. I took Hannah and Sammy on a nature walk, observing bugs, spider webs, and floating leaves along the trail, as well as a clearing with fallen logs that Hannah dubbed her “playground.”

In the meantime, Nate took the rest of the kids down to the actual playground in the park for some quality time on the swings and slide. There was a pretty lake there was well, and our kids got to run around a little too close to the shore to observe a stray fishing pole that had been left there. We got to see a bit more wildlife back at the campsite, specifically a furry caterpillar that got to climb on Hannah and Sammy, as well as a cicada that somehow claimed Jake as a friend. 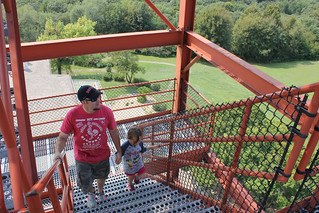 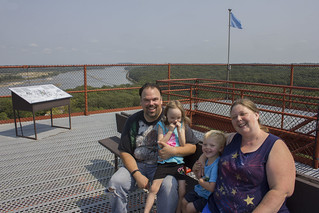 Before lunchtime, Lexi got a hammock as a birthday present and got to try it out (along with the kids, of course). Then we took a trip down the street to Platte River State Park to climb their lookout tower. It took about five stories and gave us a clear view of the Platte River. We could see several people tubing down the river and riding noisily up both directions on fan boats. Hannah and Sammy were both terrified of the high tower but both bravely made it all the way to the top (as did Aaron). 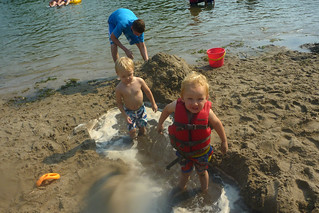 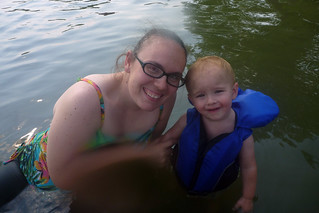 It was still a relatively warm day (in the upper 80s), so we headed down to the Lake for a couple hours to cool off in the afternoon. The littler kids spent most of their time playing in the sand along the shoreline, while Jake and Sammy continually tried to drown one another farther out in to the lake. This was also Baby Gabriel’s first time in a lake, so he got to get his feet wet along with his folks. Jake found a sandy toad before we headed back to the campsite, adding to the list of wildlife our kids have been able to touch and hold over the weekend. 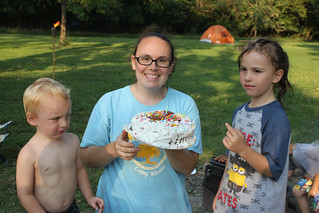 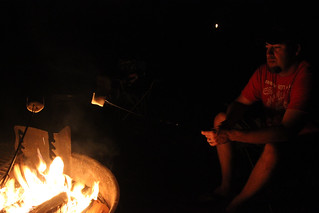 Saturday was Lexi’s birthday, so Vivian brought a chocolate cake for the kids to discreetly decorate (at someone else’s vacant campsite) for their mom before presenting it to her back at the campsite. The Mills put together a dinner of bruschetta chicken, cherry chocolate cobbler, and corn on the cob, and I took the kids on another nature walk, where they found a seemingly endless supply of snails (and mushrooms) to take back to the campsite with them. I’d never seen this many snails in Nebraska before. Maybe next time we can bring some butter and make escargot.
The sun set and then the moon came out among some spooky clouds, so I told the kids a goofy ghost story around the campfire before putting them to bed. Then the grown-ups to to spend a little more time roasting some s’mores around the fire with some giant marshmallows I’d brought along from Aldi. 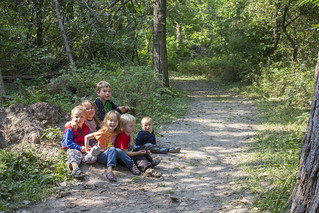 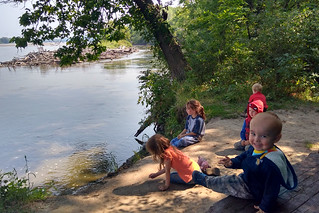 The next morning, Vivian made some breakfast casserole and pancakes for everyone (along with some s’mores for the kids) before it was time to start tearing down the campsite. I got all six kids out of the way by taking them on a long, extended walk through the forest for an hour or two (including Gabe). I got a couple cute group pictures of course, and we walked together a mile or two along the trail, getting a good look at the view of the river before heading back to camp.
It was an exhausting trip, and it felt good to return home and have a shower and sleep in our actual beds that evening, but we still had a lot of fun. Donna was also nice enough to come by the house and bring us some KFC for dinner before we got back. 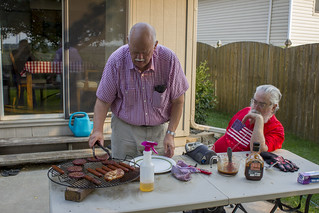 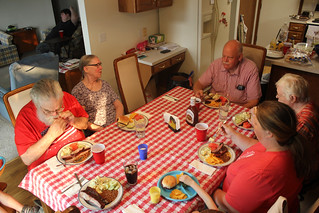 Of course, there was still Labor Day as well. Wildfires off in Montana turned our sky yellow and smoky for most of the day (with an eerie pink sun peeking its way through). Vivian took Aaron to the store to get him a new backpack for his first day of preschool on Tuesday, but we otherwise spent our entire day relaxing.

Then we dropped by my parents’ house for a Labor Day cookout with all four grandparents. My dad smoked ribs along with some burgers and hot dogs (and one lone chicken breast), and Jack and I brought some beans and potato salad respectively to complete the meal, and Donna brought some banana split cobbler for dessert.

In all, it was a lovely three-day weekend, and a nice way to kick off another busy season of fall fun, which is just now getting started! 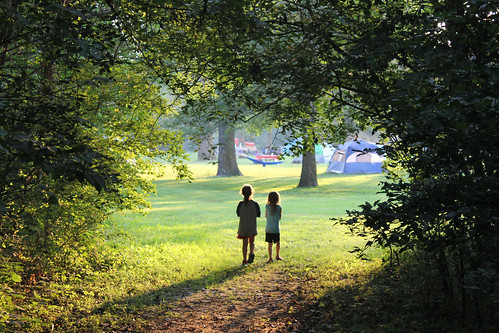