I turned a year older over the weekend, turning Jack Benny’s Age in the only way I know: with plenty of friends, family, food, and fun. 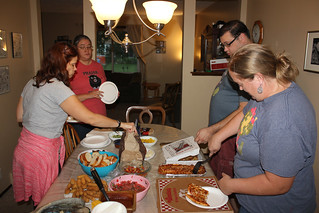 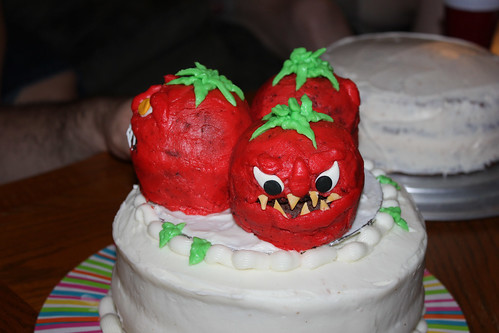 My actual Birthday Party happened a few days early on Friday night with a handful of friends at our house. I’d had the weird idea of having a Tomato Party a few weeks earlier — asking guests to bring their favorite tomato-based dishes, mixing up Bloody Mary cocktails, and then watching Attack of the Killer Tomatoes.

Our friends didn’t disappoint, of course, particularly Phil and Jen, who brought such unique things as sun-dried tomato sushi, tapenade, and eggplant parmesan, among other things. Donna also made the most frightening cake I’d ever seen (it was also made with tomato soup). The movie itself wasn’t even as bad as I’d remembered. It had a cheesy self-awareness that reminded me very much of the Zucker-Abrahams-Zucker films that would follow in its wake. 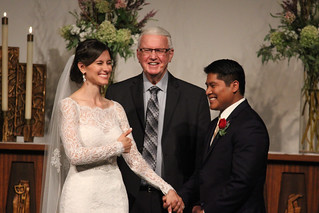 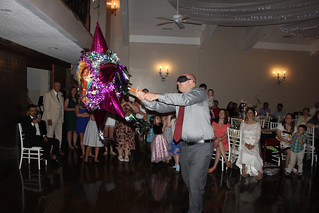 On Saturday, our friends Libby and Ole (finally) tied the knot. The ceremony was held at Calvary Lutheran Church, and we brought Hannah along as Brandon recorded and I snapped pictures. We showered the couple with poppers on their way out of the church, and then we headed down the street to The Fountains West for the reception. In lieu of a wedding cake, the happy couple had cinnamon rolls. The wedding party made their grand entrance before dinner started, and I had a nice, long photo shoot with Hannah outside as everyone got served. It took quite a while, and when it was finally our turn, the catering staff had completely run out of meat (both chicken and roast beef).

After dinner, the buffet was cleared away for the couple to have their first dance along with their dad (and Ole’s sponsor). Then, the single ladies got to line up to catch the bouquet, and the single guys lined up to take swings at a pinata before eventually turning the stick over to Ole to break the thing apart. The floor was opened up for more dancing afterward, with most of our friends getting crazy with a couple dozens others on the narrow strip of dance floor in the middle of the hall. I even got to dance ab it with Hannah and Vivian before we called it a night. 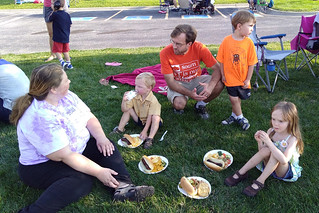 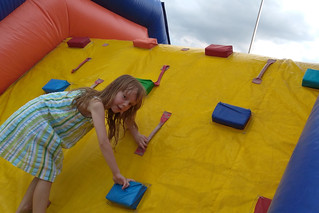 Then on Sunday night, we decided to drop by Thanksgiving Lutheran Church for their tailgate party outreach event. There was inflatable castle and obstacle course of the kids to play on after we fueled up with some brats and pulled pork sandwiches for dinner. A couple hundred people showed up, including many familiar faces, including my parents’. It was a fun evening, and it made me want to come back and visit the church myself in a week or two on Sunday morning. 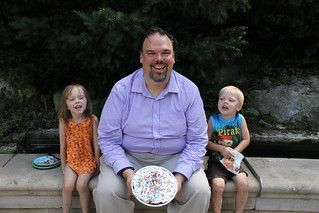 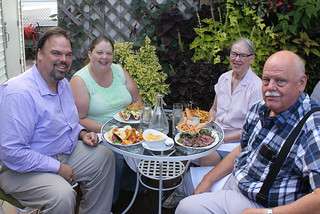 Then on Tuesday came by actual birthday. Vivian made some scones for breakfast, and then brought me a cake she’d made with the kids around lunchtime. She also got some burgers from Five Guys, and we went to Elmwood Park to eat in their pretty little Grotto. The park itself is over a hundred years old, so we had some fun walking around some of the old trails before letting the kids play for a bit on the newer playground area (which included exercise equipment for the grownups).

Then that evening, my parents took us out to Marks, a hip “wine bistro” in Benson that included menu items like a Portobello Sandwich and Tacos with Sambal chili aioli, mango, and feta cheese. We headed down to Ted and Wally’s afterward to get some obligatory free birthday ice cream before calling it a night.

It was a lovely birthday weekend. Now, we have to get back to the crazy-busy month of September, which will include camping over Labor Day and school for both Hannah and Aaron for the first time.