We’ve had a lovely, unseasonably warm start to December this year, with days in the 50s and 60s that made for the perfect time to visit the park at lunch time or to put up some Christmas decorations. I made sure to get the kids out of the house at least for a walk to enjoy the sunshine without a coat before winter actually gets started (which it will). 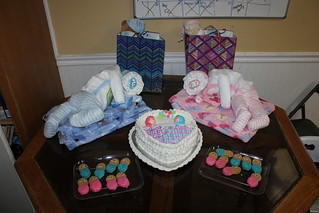 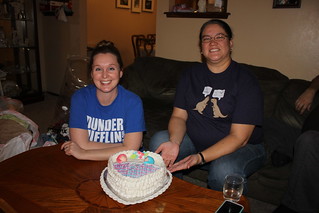 On Saturday, Vivian and I threw a dinner party for a few of our mutual friends and mommies to be Tamra and Jen (and also Phil). Vivian made an elaborate chicken dinner, and Donna brought over some lovely baby cake and peanut cookies, as well as a few collections of disposable diapers arranged like little babies wearing sleepers.

We gave away a bunch of Hannah and Aaron’s old baby clothes after dinner, and Phil and I also disassembled our dear old crib so he and Jen could use it for their new baby boy next year. It was a little hard for Vivian and me to part with this piece of furniture where both Hannah and Aaron got to sleep when they came home from the hospital, but it was far past time for Aaron to graduate to a “real,” bed, which he immediately took a liking to. 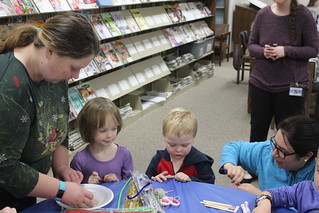 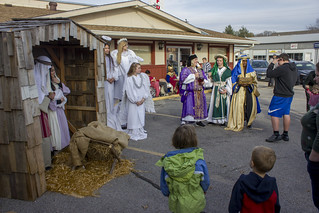 On Sunday, Hannah and Aaron played fairies and gave their kitties a weigh in before we headed to church. We skipped potluck so we could have a busy, busy afternoon doing Christmas activities in Bellevue. We stopped first by the library, where they had some snacks and crafts for the little ones. Hannah and Aaron got to make tiny “mouse” ornaments and some Popsicle stick bobsleds.

Then we went to Olde Town, where there was a Living Nativity at he firehouse followed shortly by a visit from Santa and Mrs. Claus (arriving by firetruck, of course). There were some other activities at Washington Park, including some live reindeer and a puppet show. Mostly, the kids wanted to play on the slide, the teeter-totter, and the jungle gym — and with the weather warm enough for short sleeves, we couldn’t blame them. 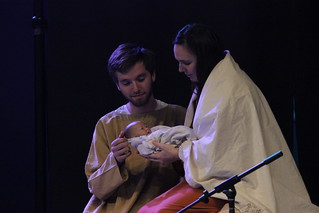 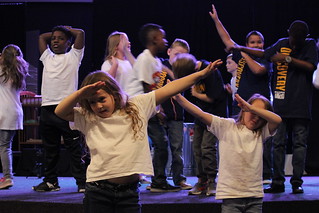 We were pretty exhausted by the end of the day, but I took Hannah right out again after dinner to see our friends the Mills in the Bellevue Christian Center’s Christmas program. The program was scripted by Ms. Karla who performed an original song for the finale, and it consisted of a myriad of skits put on by the kids at BCC, along with songs in-between them. Lexi, Sammy, and Jake all participated and did a great job. Hannah particularly had fun playing with the “snowballs” that were thrown into the crowd during one of the final songs.

It’s getting colder this week, but that only means Christmas is right around the corner!