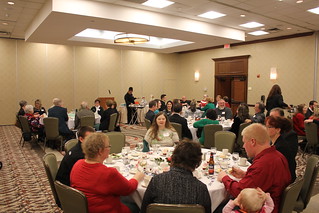 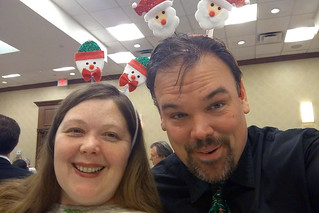 Christmas is on its way, and there are plenty of parties to celebrate before it gets here. First up is the Pope Paul VI Institute Christmas Party (which Vivian and I have attended for the last four years straight). It was held at the Omaha Sheraton, and we got to have dinner with a some of my co-workers. Afterward, Institute Director Dr. Hilgers handed out some years-of-service awards to a handful of employees (including his wife Sue).

Then we played a rousing game of “Family Feud” with Christmas-themed survey questions. Our table managed to get second place and won some cute Christmas headgear. One table decided to cheat by consistently writing the top answers after they were revealed, and fortunately didn’t escape Ann or Donte’s keen eyes. 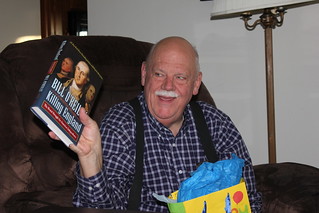 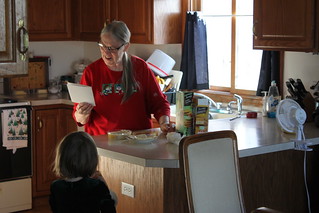 My parents both also had birthdays around this time, so we dropped by with the grand-kids to give them a couple presents and some handmade cards. I got a book for my dad, and some new slippers and chocolate for mom. We also got to see our old Family Christmas Tree up once again, adorned with chocolate-bearing reindeer heads, among other things.

In other news, there’s a bright, new Aldi on 72nd Street. It’s designed to look and feel like a regular, high-end grocery store, with wide, open aisles, and even a sample lady with cheese on their opening day. I was one of the first 100 customers, which entitled me to a golden envelope containing a $10 gift card. 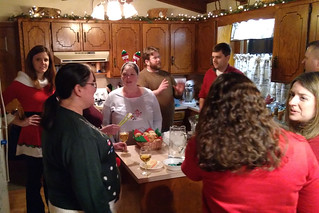 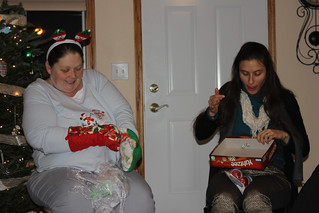 On Saturday night, Jenny and Kody had their annual Christmas Party, this year at their new home way up in Bennington. Cody smoked up some ribs, chicken, and pork loin stuffed with apple chutney, which we ate with Vivian’s roasted vegetables and a bunch of other things (and Irish Cream Trifle for dessert).

We ate downstairs with a bunch of our mutual friends, and then we went upstairs for games afterward. Jenny and Kody had a sinister game consisting of unwrapping a giant ball of prizes wrapped tightly in industrial-strength plastic wrap. It took us about five rotations around the circle before we could rip through them all. I got some AAA batteries, a notepad, and Snickers bars for my effort. 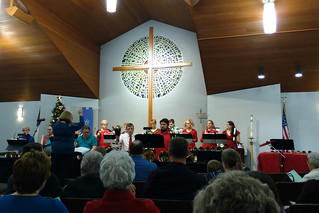 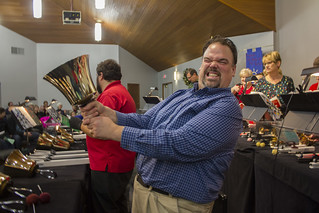 Then on Sunday night, I took Hannah to see our friends Brandon and Anne perform in the Thanksgiving Lutheran bell choir. They performed about an hour of beautiful Christmas music for us, and then they let some members of the audience come up and try to ring along with a few more songs. I got to try lugging around a giant 15-pound G bell, which isn’t nearly as easy at it looks, and I needed to use both hands just to keep time. They also had a giant buffet of cookies afterward, which was the real reason Hannah tagged along with me, so we stuck around to get sugared up with a few of our friends who came for the performance before calling it a night.