Welcome to 2018, everyone! The holidays have come to a rollicking close, though we wound up spending much of it indoors thanks to both a cold snap that brought temperatures well below zero and also actual colds among various family members. We took the kids to Burger King just to get them out of the house and play in their play area. We’ll likely be joining the Kroc Center just to have a place for the kids to run around when it’s this cold.

We’ve also had fun playing our Christmas presents, including the electric tire pump Grammy and Pop-Pop gave us, new blankets for the kids, new clothes, and my new Pebble watch. I also got rear-ended right before New Year’s, so hopefully I’ll get a new bumper (assuming they don’t total out the car). 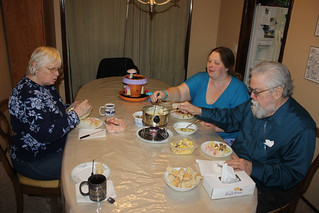 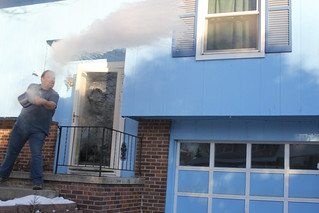 On New Year’s Eve, Vivian and her folks made a bunch of tasty foods to say goodbye to 2017. We had hors d’oeuvres with a bunch of jalapeño poppers along with some olive bread Vivian made in her cast iron and some chilled Martinelli’s to toast the New Year at midnight. The kids stayed up until around midnight (in Portugal, Brazil AKA 7 PM), and then the rest of us stayed up until midnight having a cheese fondue together while the ball dropped in New York City on TV. Our neighbors were setting off fireworks every hour as midnight approached, even though the city of Omaha cancelled theirs due to the -16°F cold outside.

The next day, I decided to have some fun with the cold, watching bubbles freeze on the front porch and tossing boiling water into the air. It eventually “warmed up” to double-digits the next day, but we’ll still probably a long ways from spring (and painting the chimney). In the meantime: half-priced rib-eye at Aldi. Yum.