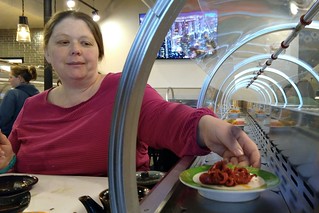 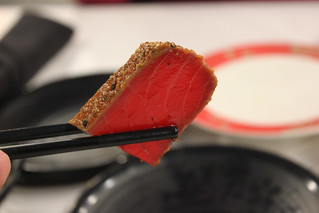 It’s hard to believe it’s been eleven years since Vivian and I officially made it official back in 2007 (and a decade since I made it even more official a year later). I took the day off on Friday and we marked the occasion by going down to Yamato Sushi Train & Grill, the only “sushi train” in the Midwest outside of Chicago.

It’s a unique concept — after taking a seat, you can essentially help yourself to any number of color-coded plates as they make their way on a conveyor belt winding its way around the restaurant. The different colors represent different prices of food, and we helped ourselves to a some tasty sashimi, a variety of sushi rolls, octopus, and a kind of pickled calamari salad. It was all good, but the next time we come, we’ll have to arrive before the lunch rush ends, since the kitchen staff tends to stop making the more interesting dishes around two o’clock. I saw one unloved pair of raw oysters make their way around the belt several times before we left (each rotation taking seven minutes — we timed it). 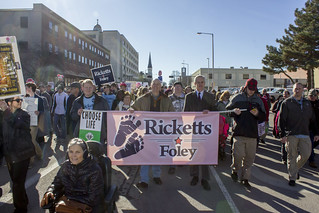 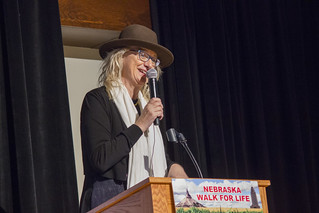 Then next day, I headed down to Lincoln and participated for the Walk for Life for the first time. Participants gathered in front of the state capitol as local pro-life politicians took the stage to say a few words, including Gov. Ricketts, Lt. Gov. Foley, Senators Sasse and Fischer, and Congressmen Jeff Fortenberry and Don Bacon, and even candidate for State Treasurer Taylor Royal. Organizers launched clusters of pink balloons into the sky before the walkers started making their way through downtown to the UNL Student Union. There were at least one or two thousand people in attendance, including lots of enthusiastic youngsters, including a group of guys who braved the near-freezing temperatures shirtless and wearing “We love babies” in body paint.

Then at the UNL Student Union, everyone gathered to hear a talk from keynote speaker Ann McElhinney on her docudrama about Kermit Gosnell, the notorious abortionist currently serving a life sentence for murdering three infants. I’d heard McElhinney on the Steven Crowder program previously and was absolutely floored by the story she had to tell about Gosnell and his “clinic.” I won’t go into detail, since this is a mostly light-hearted and family friendly blog, but you should definitely check out her new film when it’s released. It looks amazing. 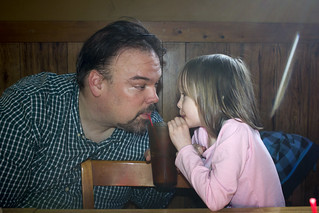 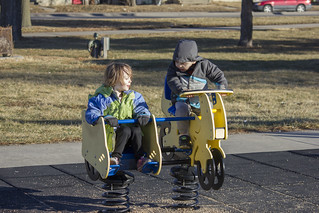 I stuck around long enough to get an autographed book and a picture with McElhinney before I left. Then I met up with Vivian and the kids, who had spent a couple hours bouncing around at Lost in Fun. We got some lunch at our favorite pizza joint, Big Sal’s on 27th, and then we took the kids to the park to run around a bit more before we headed home. I also got some pho from Pho Nguyenn to have for dinner. The soup itself came with raw ingredients to be boiled in the broth before eating, and it was easily the best soup we’d ever eaten.