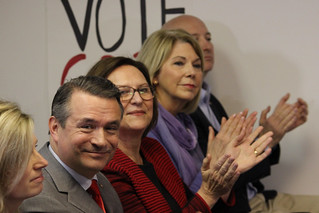 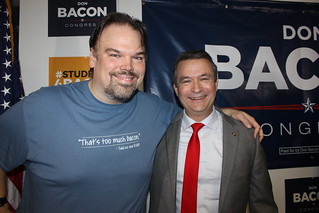 It’s been a busy week of political-hobnobbing here in Omaha. Fresh off our visit with Ben Shapiro on Wednesday came Don Bacon’s re-election campaign kickoff on Saturday. The freshman congressman had a trio of VIPs on hand to endorse him: Mayor Stothert, Senator Fischer, and Gov. Ricketts (the latter two also happen to be running for re-election). Bacon gave a rousing stump speech, in which he advocated for such things as term limits and a balanced budget amendment and highlighted the recently passed Republican tax cuts.

Then everyone mingled in the crowd afterward over a barbecue lunch. One thing I love about Omaha is how easy it seems to be to shake hands and chat with a mayo, governor, senator, or congressman and tell them what’s on your mind. There were other familiar faces in the crowd, including Bellevue Mayor Rita Saunders, former Omaha Mayor Hal Daub, and our buddy Taylor Royal, who’s now running for treasurer. Also on hand was Mason the Button Boy and his dad, hoping to score a couple more lapel pins for his collection. 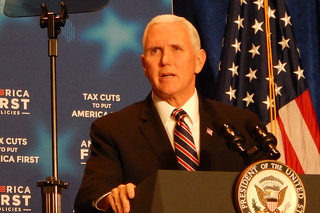 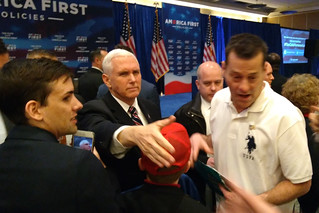 Then on Tuesday the Vice-President came to town. He was visiting Omaha to speak at a high-dollar fundraiser for Gov. Ricketts, but he also spoke at a free event hosted by a group called America First Policies beforehand. An hour-long round-table discussion came first, and then Iowa Gov. Kim Reynolds came out to introduce the Vice-President. The VP highlighted the tax cuts for the most part, but encouraged everyone in the crowd to tell their friends that “America is open for business.” There were no words about tariffs, but Pence did take a jab at the media and got a standing ovation for remarks on standing for the national anthem. It was a speech tailor made for a friendly crowd in a “red state” and felt like a campaign rally.

I’d seen Pence twice before during the campaign, and each time he was interrupted by protesters. This time around, I couldn’t find any protesters inside or outside the venue (though they were apparently somewhere in the area). I got close enough to the VP to shake his hand and take a couple selfies with him in the background, My friend Mason the Button Boy, however, got a special treat — the VP gave him a special lapel pin to add to his growing collection, along with a coin featuring the VP seal on one side and Pence’s signature on the reverse. I chatted with his dad afterward who said his son called it “the best day ever.”

A friend on Facebook asked that evening how I get access to all these political events. It’s funny because these events are open to the public — you don’t even have to donate a dollar to attend and shake hands with the Governor and the Vice-President. I think I’m just lucky to live in a country where that sort of thing is possible. Either that, or I live across the river from an early primary state.

Bonus: KPTM Fox 42 did a story on my buddy Mason, which you can read about here.