Can you believe we had a blizzard just last week? It seems now we’ve skipped right past spring and gone into summer, including our kids first sprinkler-run of the year and Grammy’s house. 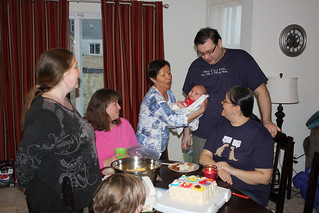 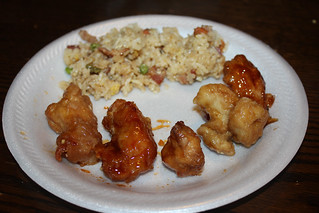 On Saturday, our friend Jen celebrated a birthday with a General Tso’s chicken taste-testing at her house. A handful of us brought samples of the signature Chinese dish from various places from around Omaha. Vivian and I got ours from Sina Way in Bellevue, which turned out to be the winner. Phil made some fried pork while Jen and her mom made a bunch of scallion pancakes, among other things.

We also had cake, provided by a few of Jen’s nieces. Vivian gave Jen a jar of homemade bacon jam and a batch of bacon gingersnap cookies, which we made with the leftover grease. Hannah and Aaron seemed to have fun with Miriam’s boy Ezra, and several people got to pass around Baby Gabriel before the night was over. 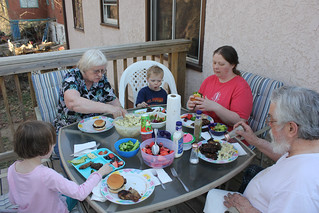 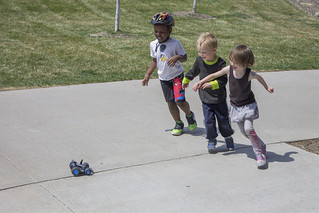 On Sunday, I took the kids to my parents’ house to get them outside for a bit. They played with Uncle Jonny in the backyard and did some drawing at the kitchen table. They also made some disgusting “soup” with debris from the yard to gross out grandpa. Then on Monday Vivian took the kids to her parents’ house for a run through the sprinkler. Hannah and Aaron also made villages with fairies and gnomes under the large evergreen tree, and we stuck around to have some burgers Jack grilled up for dinner on the deck afterward.

Then on Tuesday we took the kids for a romp at Stinson Park for the first time in well over a month. It was a nice excuse for daddy to break out the remote control car he got for Christmas and give it a test-run. The kids had a fun time running around and chasing it before it was time to call it a day.