There seemed to be no segue between winter and summer here in Nebraska, but we are getting plenty of blossoms, including our lilacs, which seem to have made their week-long appearance in our backyard. 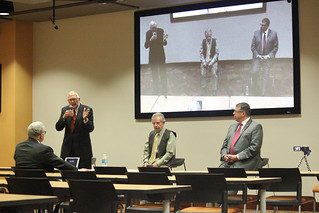 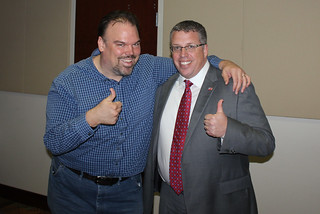 It’s also campaign season again, and three Republicans are vying for Deb Fischer’s Senate seat in the GOP Primary: Todd Watson, Jack Heidel, and Dennis Macek. I got to hear all three in a debate last Wednesday, and they have a fairly diverse we range of views. Heidel seems to be a moderate who thinks a single-payer “Medicaid for All” is “inevitable.” Macek is a practicing Buddhist who is running primarily to help stop climate change. Watson seems to be a fiscal conservative in step with Todd Massie and Rand Paul, concerned with the debt and upset that Fischer isn’t holding the line on spending.

It was a very small group of spectators who showed up, so I have a feeling Fischer’s seat is going to be safe on election day May 15. I did tell Watson that I appreciated him pushing back on such things as the budget deficit. Republicans definitely need that. 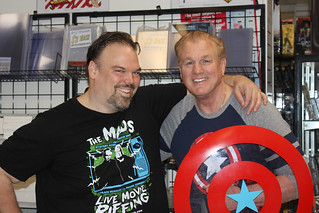 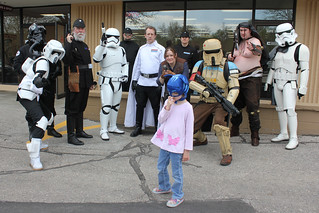 Then came Cinco de Mayo on Saturday, but I wound up mowing my parents’ lawn and playing Nintendo with Hannah instead.

Then afterward we went to Krypton Comics to see Reb Brown for Free Comic Book Day. He was Captain America in the 70s and played roles in a variety of B-movies, but I’ll always remember him as David Ryder, AKA Slab Bulkhead, Fridge Largemeat, Punt Speedchunk, among a couple dozen others in the MST3K riffed 80s film Space Mutiny. Richard came along to get an autograph, and we chatted with Brown about his experience with Space Mutiny. He seemed bewildered about all the nicknames they came up for him, and he commented on the notorious slow go-carts featured in the movie (and the bored face he made riding on them between takes). He also said the movie was filmed in an old asbestos factory, which he only learned about when he saw other crew members wearing face masks.

Among the other guests were members of the 501st Legion outside, and I was able to coax Hannah into a picture with them before he headed off for ice cream afterward. Then we headed home, and I made up some ceviche for dinner as Aaron helped mommy squeeze some limes. 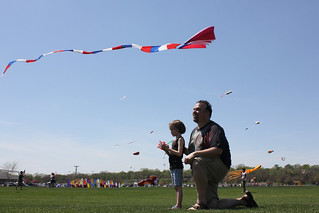 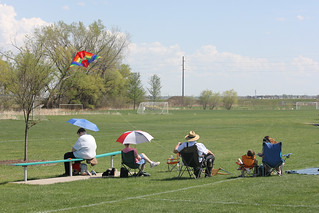 On Sunday, we headed down to La Vista for the One Sky, One World Kite Festival. It was a beautiful, windy day, and we were able to set our Dollar Tree kite aloft with minimal effort (after figuring where to put the string). Hannah and Aaron took turns holding the spool, and then my parents and Uncle Jonny came by during the candy drop to fly their own rainbow kite. We wanted to get Hannah’s Toy Spike airborne on our little kite, but he was unfortunately too heavy. Mostly, we just watched the kites fly as we hid under umbrellas and repeatedly applied sunscreen to avoid being burned. 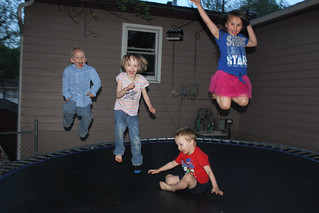 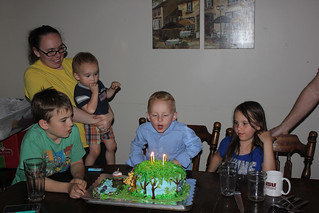 Then on Monday, we celebrated August’s birthday over at Nate and Lexi’s house. Nate grilled some hot dogs for dinner, and then we had some of the Jungle Cake that Donna brought over, which featured frosting representations of multiple animals, including the Mills own cat (who we met afterward). We let the kids bounce off their sugar rush on the trampoline out back before heading home.

Next up: Lauritzen Gardens and Mother’s Day! I just hope we don’t have to turn on the air conditioning yet.