We’ve had over a week of non-stop activities without much of a break in-between. How much fun can we fit into a three-day weekend? Way too much, apparently. 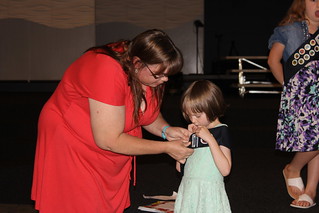 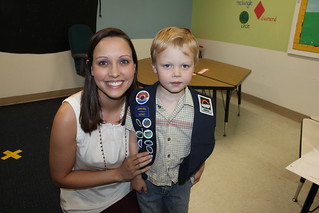 The kids started their swimming lessons at the Kroc Center on Tuesday, and I managed to squeeze in a repair job on Thursday for our washing machine (which needed a new lid switch). I was rather proud to get it up and running again.

Then on Wednesday night, Hannah and Aaron had a graduation ceremony from Daisies and Rainbows at BCC for MPact, along with all their little friends. Hannah got a special pin, and all the little ones got to recite verses and songs they’d learned through the year — before getting sugared up afterward, of course.

On Friday night, we took the kids on down to the SumTur Amphieater to see Pixar’s Coco after the sun went down. There was also a festival for Omaha area youth bands going on that provided music before the show. Kate and her girls came along to toss around a football before the show, and Jessica and Jon came along as well. The weather stayed steamy and hot most of the weekend, but we had a lovely sunset before the show started. The movie itself was very sweet and big on the value of family, though I wasn’t sure how to explain the theological implications of Día de Muertos to our kids afterward.

On Saturday, I got up early to mow the lawn and turn on the sprinklers for the first time this year, which Hannah enjoyed running in to beat the heat. Then that evening we went across the river for Loessfest. It was a balmy 98+ degrees, so we cooled off at the new “spray-ground” at the top of the hill, which had some mist, sprinklers, and a wading pool for everyone to splash in (including daddy).

Meanwhile, the Folkens were managing the shaved ice stands down in the park, so we got some multicolored slush to eat while the sun went down. Then thousands of people gathered on the green with us to see Frankie Valli and the Four Seasons perform a many of the band’s catalog of hits. Opening for them was the Heather Newman Band, which Lisa described as a “local girl done good.” The concert itself was terrific, and we took turns squeezing our way to the front of the stage to take in the music up close. Our kids, however, seemed to enjoy playing with each other and making a makeshift tent and playing in their wagon.

The only bad part of the night was spending two hours trying to get out of the park. We’d parked nice and close under the overpass, but that put us at the back of the line as thousands of people (along with everyone at Stir Cove for another concert) all had to squeeze out of the one-lane exit before we could. It took us over two hours to finally make it to the Interstate and head home.

Of course, that didn’t stop me and Hannah from coming right back the next night to hear the Omaha Symphony Orchestra. They played a medley of patriotic tunes with a little Star Wars and Indiana Jones thrown in for no apparent reason. Then local singer Camille Metoyer Moten sang God Bless America before the orchestra finished with Stars and Striped Forever.

After the concert, there was a spectacular fireworks show set to such music as Let it go from Frozen (rather than Lee Greenwood’s God Bless the USA, for whatever reason). We joined Kate and girls on their blanket along with Aunt Jessica, and we also chatted with the Folkens, who were came to enjoy the show this tine rather than serve flavored ice. I parked across the river this time around, which made for a much quicker drive home afterward.

Then came Memorial Day. I spent some time cleaning up the backyard and getting the kids wet with the sprinkler in the morning, and then Vivian and I prepared some shish kabobs and loaded potato salad to take to my parent’s house for dinner. The kids got more sprinkler time in my parents’ backyard as my dad brought out the smoked brisket he’d cooked up earlier in the day. Uncle Jonny kept the kids occupied as Jack and Donna joined us with some beans and dip, among other things. Then we dished up and ate together on the back patio, which was much cooler than the 95 degree forecast suggested it would be (thanks in part to a passing shower).

Nathan and his new friend Rachel dropped by almost in time for dessert afterward, and we got to have some berry pie along with Vivian’s decadent chocolate cheesecake. Nathan and Rachel also had some gifts for Hannah and Aaron from a recent trip to New York City, which they naturally loved playing with before we called it a night.

It was a long, crazy, busy week for all of us, and we’ll probably need an extra three-day weekend to recover from all the fun (and do laundry with our now-fixed washing machine).