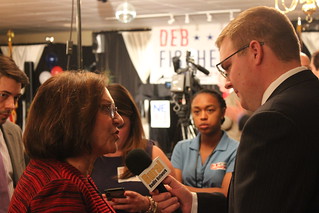 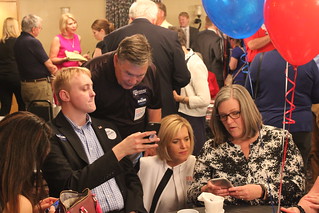 Wednesday was Primary Election Day in Nebraska, so I penciled in a few circles in the morning and then gathered with a crowd full of Republicans that evening to watch the election returns come in. It was officially a victory party for Senator Deb Fischer, who was able to handily re-win her nomination despite a number of contenders vying for her seat. Gov. Pete Ricketts was also there to kick things off, who similarly won his shot at being re-elected governor. The only Republican primary most people were unsure about was the race for State Treasurer, but the election was quickly called for John Murante, who won the nomination over Taylor Royal.

Strangely enough, the race that kept everyone on the edge of their seats was the one between Brad Ashford and Kara Eastman to run against Don Bacon. Ashford was clearly the favorite of the Democrat establishment, but Eastman managed to pull a major upset by pulling ahead by one or two percentage points. Kenny Pancake from the Bacon campaign (it sounds like a joke but it’s not) kept tabs on the results as they came in, and other folks like Ian Swanson from 1420 AM and Lt. Gov. Mike Foley watched on their mobile phones throughout the night. It was a lively night, and I got to shake hands with all the VIPs before heading home. Ricketts in particularly told me the Republicans were in for a serious fight this fall. Hopefully the next election night event in November will be more of a party and less of a wake.

I just hope I get to be there.