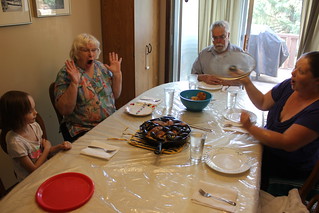 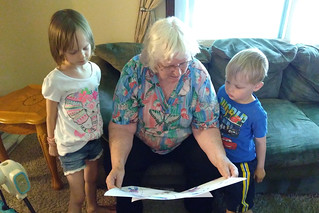 We’ve got one day left before Vivian and I celebrate ten years of marriage together! In the meantime, we’ve got another celebration to recognize — Grammy’s birthday. On Tuesday evening, Vivian and Jack made up a giant seafood paella. Grammy got to use our new special “birthday plate,” and the kids got their first taste of several things, including scallops (which Hannah thought at first was a banana).

Hannah drew Grammy a sweet birthday card (on giant paper), and Grammy got to blow out the candles on a giant dark chocolate lava cake that Vivian made. It was made with Ghirardelli brownie mix and Lindor truffles, with enough concentrated cacao to nearly put me in a coma (it was especially good with vanilla ice cream). 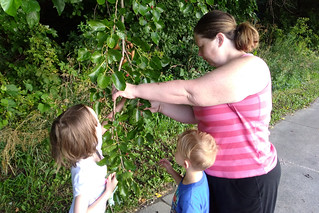 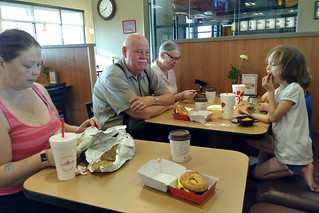 The next morning, it was a lovely 64 degrees outside, so the whole family wound up walking 1.3 miles down the street together for a morning stroll down to Chick-Fil-A for breakfast. We picked some wild mulberries along the way, and then I called my folks to come join us before it was time to head off to work.

Next stop: Kansas City to celebrate a decade of married life!